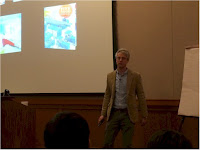 Brian Floca is a Caldecott winning illustrator, but I'm a fan because of his nonmedal winning book, Five Trucks. Which, by the way, he mentioned in his Connecticut Book Fair talk last Sunday.

He began his presentation with a slide of his juvenelia. You know, things he'd drawn when he was a kid? I like to think that as a toddler I could have drawn ovalish figures like he did when he was that age. My guess is that our paths diverged probably around second or third grade. 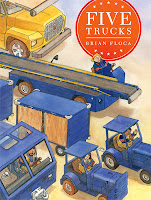 Brian said that as a child, he liked to draw pictures that told stories. Just an hour or so earlier, Jane Sutcliffe talked about seeing a story in the face of Michelangelo's statue David. In both cases, we're talking about a way of looking at art. Which is pretty much all I do with art, if you didn't already pick up on that in the last paragraph.

Sandra Horning also talked about story in her presentation.  In her case, it was the inside story on her books. Brian's inside story on Five Trucks? He was early for a plane and sketched trucks while he was waiting at the airport. He quoted Jack London as saying that part of an artist's job is to go out and look for ideas. But I think some people barely have to look for them. They just see them, which I think the inspiration for Five Trucks illustrates.

Brian also talked about the importance of research for artists. Part of his research for Locomotive involved driving the route of the Transcontinental Railroad. My immediate thought was, what writing project could I get started on that would involve research like that?