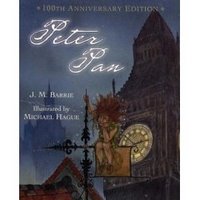 If you belong to the child_lit listserv, be sure to check out this past week's discussion of Peter Pan. It was initiated by moi after having been weirded out by the book by J. M. Barrie.

As I've confided here before, when I was in second grade I fell desperately in love with Peter Pan after reading the play. I must have talked about it because the girl next door started sending me love notes from Peter, leading me to believe he lived in the woods behind our house. (The neighbor became some kind of minister, probably out of guilt over what she did to me.) I don't know how I found out the truth, but I was devastated. I remember my mother telling me to remember how I felt so I would never do to anyone else what my neighbor, Debbie, did to me.

And sure enough, I have never sent anyone love notes claiming they were from Peter Pan.

Anyway, I can recall seeing the Mary Martin version of the play on television when I was much older. After I had children, the ending would reduce me to tears. (Of course, at that time a Kodak commercial or an episode of The Twilight Zone could reduce me to tears. I was suffering from sleep deprivation, because I didn't sleep through the night for nearly ten years after my first child was born.)

Then last fall I read Peter Pan in Scarlet, a Cybils nominee, and thought it was just marvelous. So I decided I would go on a Peter Pan binge, and I've just recently finished reading the 100th Anniversary Edition.

Oh, dear God, this book is so creepy.

Is it a children's book that today's children probably can't read? (A 2004 New Yorker article called Lost Boys describes Peter Pan as "close to unreadable—sometimes because it is sappy with sentiment but mostly because it is just too gnarled and knotted for current taste...let alone for that of our children.") Was it meant as a book for adults as some of my colleagues on the listserv contend?

There's much in the story that I find witty, perhaps even satirical. But I wonder if it was meant that way or if I'm just reading something into it. For instance, when Wendy tells the pirates who have captured her that she's speaking for all the boys' mothers when she says, "We hope our sons will die like English gentlemen," is that for real? Or is it a joke?

This is a bloody and violent story in which children, pirates, and Indians are all killing one another--presumably for real. Not that violence has no place in children's literature. But this is bizarre stuff that results in no serious grief. It's all part of the adventure. Peter says, in fact, that death will be an adventure.

Another Cybils nominee, Larklight plays on some of the same British imperial attitudes we see in Peter Pan. In Larklight, though, we know it's all a joke. I'm just not sure in Peter Pan.

Oh, and the book is racist, too. And it's got a mother obsession thing going that probably went over much better back at the turn of the last century than it does now.

Peter is one strange fellow, by the way--self-centered and insensitive and yet the object of all the ladies' affection. Including mine back in the day. What the hell was I thinking?

One of the things that's particularly freaking me out about this whole episode is that I have a book coming out in June that deals with fantasy play. I just today mailed out a draft of a second book in the same series. The children in my book create elaborate games and want to be vampires and hunt for clues involving bullet holes and blood and want to play with guns and handcuffs. In the first book they play pirates!

I am up to my eyebrows in Peter Pan-like fantasy. How weird is that?
Posted by Gail Gauthier at 7:14 PM
Email ThisBlogThis!Share to TwitterShare to FacebookShare to Pinterest
Labels: Peter Pan

Yes, Peter Pan is weird. Wonderfully weird, to my tastes. Peter is a little monster, in the sense that he's not right biologically. He won't grow up, he still has his baby teeth, he's got the short-term memory of a mayfly. He's appealing and exasperating in equal measures.

Barrie was, of course, of his time in writing about Indians and Wendy's highest ambition as a mother. Yet he was of no time at all in writing about a dog as a governess and ticking alligators and missing shadows.

I first sat down to read the novel as an adult, and I didn't have fond recollections of the stage or screen adaptations of Peter Pan (except for one that my brother starred in, and I was fond of that for Al's sake). So I didn't feel any shock of non-recognition, and I don't know how I would have felt about the book when I was younger. On that first reading, I was delighted at how much stranger, darker, and richer the novel was than the versions I'd glimpsed along the way.

Oh, absolutely. It is much darker than I think people who are just "generally" familiar with Peter Pan would ever expect. In fact, when I was reading the ending when Peter comes to the adult Wendy, I was thinking that it could be the starting point for a horror story.

I agree that Barrie was of his time in his attitude toward Indians and women, and I'm willing to read his work within the historical context. There are readers today, though, who find him extremely racist.

I'd ramble here for days! May I instead point to you my post about Peter Pan?

Little Willow's post is notable for directing readers to other Peter Pan related titles, some of which I hope to pick up at some point.