Ah...Isn't This Just Junie B. Jones With Good Grammar? 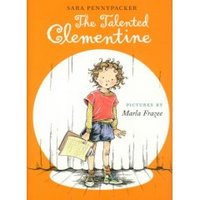 Get ready, people. This is going to be one of those Gail-doesn't-like-a-beloved-book posts. I haven't done one of those in a while. Five weeks, I think.

I don't hate The Talented Clementine by Sara Pennypacker. It is well-written. It has a real story, and it doesn't have any cartoon bad guys. Pennypacker treats her readers with respect. But I've been hearing things about Clementine for a while now, including comments like, "Everyone says they want more books like Clementine." So I was expecting something very different, not just different from what I found but different in terms of other books.

I've only read a couple of Junie B. Jones books, so I'm no authority on the subject. But these two series seem amazingly alike to me, right down to these kids being cute the way adults like kids to be cute. They're cute like the youngest kid in a sitcom family--not the older wiseass kid, but the one who says oddly adorable things that have some kind of significance. And both kids interact with adults a lot, which isn't a bad thing. It just sort of gives the book more of an adult interest to me.

I know kids are supposed to love Junie B. Jones, and I imagine they must love Clementine, too, since she's so much like her. How intriguing since both characters seem like an adult's idea of the model nonconforming child--cute and nonthreatening. Kids like that kind of nonconformist, too.

I realized recently that I haven't been posting links to positive reviews/material to give readers an opposing viewpoint the way I used to. So check out the awards and positive reviews the first book in the Clementine series received.
Posted by Gail Gauthier at 4:10 PM
Email ThisBlogThis!Share to TwitterShare to FacebookShare to Pinterest
Labels: Books for Younger Kids

Don't worry, you aren't totally off on your review. Although I don't think I really thought anything terrible about it, I still liked the original Clementine better. C'est la vie.
Here is my review for The Talented Clementine.
http://5thgradereads.blogspot.com/2007/07/talented-clementine-by-sara-pennypacker.html

I wondered about the art thing, too! (Referring to your review.)

I also think it's interesting that you teachers were looking at this book for fifth graders. I'll take your word for it, because you guys are in the classroom, but I would have thought this book was for younger kids.

Though I did read at one of my listservs that sixth graders like Junie B. Jones because it makes them nostalgic for their youth.

Yeah, I was leery for fifth grade as well. It turned out that it was
just a fun, isn't this cute kind of thing. Not really a book I would
give someone for an independent reading book unless they were an
inexperienced fifth grade reader. (Of which I do have many) I should
have also pointed you to my review of Clementine, the first book.
http://5thgradereads.blogspot.com/2007/07/clementine-by-sara-pennypacker.html