Can You Believe It? I Found Still Another Dad Book 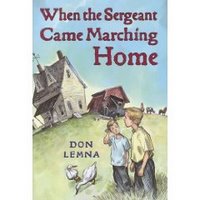 Four or five weeks ago, I was in a library and decided I wanted to read something I'd heard absolutely nothing about. I was going to pick a mystery book off the shelf. (By which I mean not the genre but a mystery to me.) I settled on When the Sergeant Came Marching Home by Don Lemna because it's set after World War II (historical novel) in Montana (where a family member lives). It was a good choice because though the book was reviewed in journals, including a starred review in Booklist, I didn't find a whole lot about it on-line. Most mentions came from library blogs, posting about new purchases.

When the Sergeant Came Marching Home is a retro boys' book. It reminded me of the Soup books by Robert Newton Peck, which were popular at Chez Gauthier a few years back, in that they're realistic tales about two young boys set in an earlier period in the twentieth century. My impression when visiting schools is that most kids no longer know who Soup is, and I wonder if any of those old boys-having- adventures-while-growing-up books are read much anymore. I still hear a lot (at least on-line and at listservs) about Little Women and Anne of Green Gables but not so much about Homer Price. So today's young readers may be ready for Sergeant's ten-year-old narrator Donald and his younger brother Pat.

The basic story line that holds these stories together involves Donald's dismay when his father comes home after World War II and moves his family away from the small city where they'd been living without him to a quite rundown farm. Rundown as in no electricity and an outhouse. Donald is so distraught about this turn of events that he can't bring himself to refer to his father as anything but "the Sergeant," his title when he left the military.

For those of us familiar with the old boys' adventure stories, a lot of the situations in When the Sergeant Came Marching Home will sound...ah, well, familiar. But they didn't seem stereotypical to me. I think, instead, I might call them classic. You have your outhouse story and your pain-in-the-neck minister Dad doesn't like coming to dinner story and your build a spaceship story. Plus you've got the red-headed Irish mom who doesn't take any crap from the Sergeant even though he did clear the Nazis out of Europe and the beloved teacher at the one-room schoolhouse.

Perhaps these tales go down so well because Donald can be very drole. The beloved teacher, for instance, "had actually trained for a singing career and had only been held back from it at the last moment by her voice." Plus the father-son story adds a little twist, making these adventures a little more than unrelated episodes.

Adult readers of this book can have some fun with a few of the characters. A squatter on the family's land, who may or may not have known Lawrence of Arabia, and a very funny neighbor in the market for "a good Christian workin' woman who don't take to fancy-dancing around and all that prettifying stuff" could, with just a little tweaking, become the guest villains on Law and Order SVU. I was reading along going, "No, kids, no! Don't go in there!" "No! Don't eat that!" "For the love of God, don't get in his truck!" Ah, but the past is a foreign country; they do things differently there. Heinous criminals were fewer and farther between back in the era in which this book is set. It was interesting the way I kept projecting my present day fears unto those quirky guys from another time.
Posted by Gail Gauthier at 7:26 PM
Email ThisBlogThis!Share to TwitterShare to FacebookShare to Pinterest
Labels: historical fiction, Reader response

I have a kind of midwifey feel about this book, as we published quite a bit of it as separate short stories in The School Magazine (an Australian children's magazine). At that time the stories were set in Don Lemna's native Canada -- I believe the locale was changeds to meet US publishing imperatives. For me a good bit of its appeal is precisely that it conjures up a world before adults got so trerrified on children's behalf