Gail Gauthier Visits James Thurber or Pictures From My Vacation!

Yes, I'm still talking about my vacation. Have I mentioned that I had a great time?

While planning this thing, I decided that I wanted to visit an author's home. Pretty much any author. Seriously. I googled Ohio and authors.

And guess who was born in Ohio and whose early home is open to the public. Yes! Jimmy T! Well, we have more of a Mr. Thurber and Who? kind of relationship.

James Thurber was still a very big deal in my school days. I was quite excited about hitting Columbus and visiting his house. I own three Thurber books and reread what some call his autobiography (I think it's more a collection of memoirish essays, myself), My Life and Hard Times,
in the car last month. No, My World and Welcome To It was a television show. 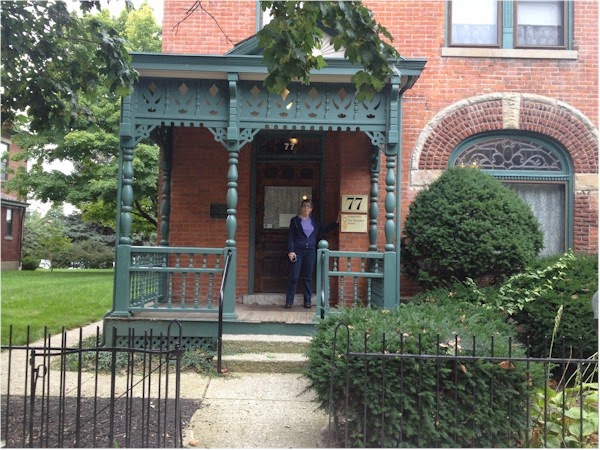 This is me standing in front of the home Thurber and his family lived in during the My Life and Hard Times period. Sigh. I am wearing the sweater I lost on the road. Hard times, hard times.

Thurber House is a terrific spot. The Thurber House organization both preserves the past and maintains an active present with all kinds of literary and educational programs.

Each room has only one modest sign giving information. But it was terrific information about living in the house. For instance, this is a Victorian era building, but the Thurbers were living in it post 1900. Victorian front parlors were changing by that time, I read. People were using them for more than company. Kitchens and dining rooms were the spots in a home that were most impacted by style changes. And in James' room there was a sign describing how the women's magazines of the era advised mothers to decorate their sons' rooms.

Do you know any of those families that likes to go through museums pointing at things and saying, "We've got one of those at home...And one of those...And look! I've got that thing. But better?" Yeah, I come from one of those. And I married into another. 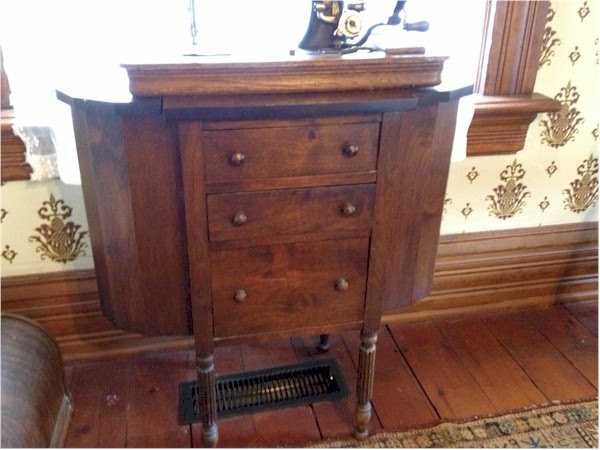 This sewing cabinet to the left that I saw at Thurber House? I've got one just like it in my office. It came from my mother-in-law who had two of them. Came from some other family member, I'm sure. At the Thurber House, they have a sewing machine on top of it. I use mine for holding stationery. I call it the stationery cabinet. The younger members of my family don't even know what the thing really is. 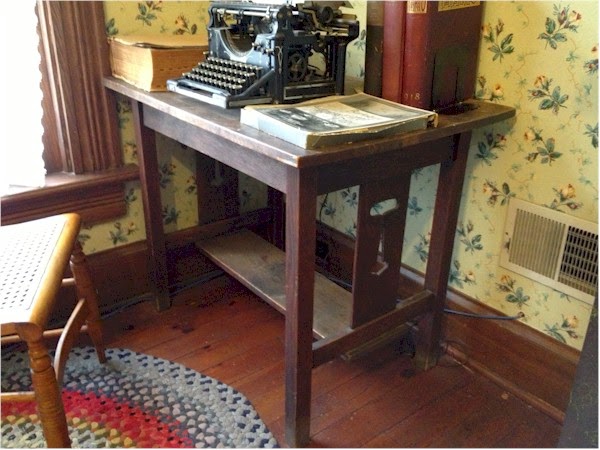 Then this table to the right, which the Thurber House people have a typewriter on? Interesting story. These things are known as library tables, by the way. I don't know why. Anyway, ours was in my mother's house when I was growing up, but one of my sisters doesn't remember it. Then my understanding was that the table came from my grandmother Gauthier's house. But no one else in the family has any memory of that. Which is why it is appropriate that I should be the one to have the table. No one else.           .

We're using it for a changing table now.

So, anyway, the Thurber House is great. And those educational programs I mentioned? I learned that James Thurber and I had relatives with similar taste in furniture.

Posted by Gail Gauthier at 9:49 PM
Email ThisBlogThis!Share to TwitterShare to FacebookShare to Pinterest
Labels: Gail goes on and on, Gail the Center of the Universe, Travels With Gail

I wish I had known you would be so close to me-- I would have had you to dinner! Even though I live about half an hour from the Thurber House, I've never been there. Thanks for the tour!

Oh, I should totally do that my next vacation - visit an author's house! Just... Google where one is, and go. What a great idea!

Karen--Then we would have had an authentic Midwestern meal. A charming young waiter outside Cleveland told us that hamburgers are Midwestern. We were only in Columbus for the hour it took us to tour the Thurber House. We stopped on our way from Cleveland to Dayton.

We live about a half hour from the Mark Twain House in Hartford. We've only been once, and that was after living here for years.

Tanita--I don't remember how I got started visiting author homes. We're about 2 hours from Concord, Mass., home to the Transcendentalist writers and the woman who wrote The Five Little Peppers, and I've been all over that town. About 10 years ago, we did the Maritime Provinces and hit the home that was the setting for Anne of Green Gables while we were on Prince Edward Island. That's the only reason I've read Anne. I read it on that trip.

What a great visit! I wish you'd come while I was there in July. We could have had tea in the parlor! The five weeks I spent there were so, so special. I was very sad to leave, even the ghost.

I would have loved that, too. Did you stay there in the attic apartment?