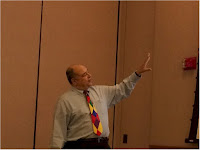 I saved my Alan Katz post for last, even though he was the third of the presenters I saw at the book fair last Sunday, because I had a particularly interesting experience at his event. 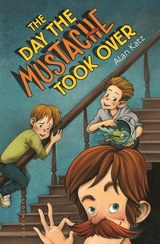 I had never heard of Alan until last month when I was working on the Connecticut Children's Literature Calendar. He made another appearance in this state early in November. So when I saw that he'd written a middle grade book called The Day the Mustache Took Over that looked like humor, I thought, Oh, I'll do a nice thing for this author and go to his presentation and maybe write about him because I'm so incredibly nice and I can feel so good about my niceness.

Well. This guy does not need niceness from me.

He's written several books of poetry for children. His work in one of them, Poems I Wrote When No One Was Looking, has been compared to Jack Prelutsky's. He has a fascinating background. He describes himself as a "print and television writer," and he's written for Rosie O'Donnell's show (parody songs and humor), animated series, awards shows, game shows, The New York Times, comic books... He sounds very comfortable moving among different types of writing.

Like Brian Floca, Alan showed us some of his juvenilia. In his case, it was a short story he wrote in third or fourth grade. I was mortified. That thing was good.

Alan did a very engaging presentation with fun for the kids and content for the adults. There was singing. I kid you not. And I didn't mind singing.

So I didn't know anything about this author. I went to his presentation, anyway. Had a good time. Was impressed. I'm going to look for new-to-me writers again when I'm at a book fair.