Recently I stumbled upon an interesting combination of books at one of my local libraries. The Only Girl in School by Natalie Standiford is about, you guessed it, the only girl in a school. The Last Boy at St. Edith's by Lee Gjertsen Malone is about the same thing, but with a boy. Both books were published this year. Hey, I know an opportunity when I see one. 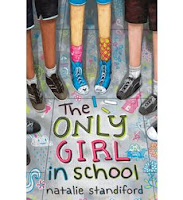 Both books were classified as juvenile fiction at the library where I found them, though Girl in School involves a younger protagonist and reads younger. Claire finds herself the only girl in her school at the beginning of fifth grade. Evidently no one in her town had daughters for years or else they moved out of town. That seemed improbable. The opening scenes in which boys are giving Claire a difficult time and adults are ignoring it were a little disturbing, too.

Last Boy was more believable. Jeremy is the last boy at a private girls' school, one of a small group who had enrolled during the short period when the place was coed. He's at the beginning of seventh grade and wants out. But his mother refuses to consider him leaving, because she can't afford to send him to another private school. He's at St. Edith's because she works there. His only other option is the local public school, which has a bad reputation.

Both Claire and Jeremy are experiencing some aging issues apart from their situations. The tight friendships they'd had with members of the opposite sex when they were younger are becoming awkward now that they're older.

Here's the big difference between the books: The Only Girl in School is pretty much an account of things that happen to Claire. In The Last Boy at St. Edith's Jeremy tries to do something about his situation. Okay, trying to get kicked out of school isn't a very logical or practical plan, but he is doing something while Claire is mainly receiving whatever action Fate sends her way.