The Weekend Writer: Get Yourself Out To Hear Authors Speak

I am not a fan of new writers, whether they are fourteen or forty, rushing out to publish the first or second or maybe even the third thing they've written. They'd be better off, I think, first spending some nonwriting time reading widely, taking part in book discussions, joining the best writers' group they can find, and attending the public appearances of published writers. Appearances are opportunities to hear about the experiences of more established writers and, perhaps, to ask them questions.

All Writers Can Gain From Other Writers, Part I 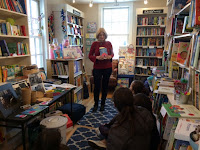 Even experienced writers can gain from attending another writer's bookstore or library appearance. A case in point: My trip out last weekend to see Jeanne Zulick Ferruolo.

During her talk, Jeanne spoke about writing she did as a young student. This type of writing is known as juvenilia, by the way. I first heard of it years ago when Justine Larbalestier did a blog post about a juvenilia panel she was part of. She was considering posting some of hers at her website "to demonstrate that even the most talentless kid can grow up to be a writer." I have some kicking around my office and have thought of put some up at my website, too, primarily to store it.

Why does it need to be stored? Kept at all? Shouldn't Gail the Minimalist being ditching these things?

Jeanne's talk illustrated a very legitimate reason for holding on to juvenilia and for sharing/studying it. She held up a story she'd written as a child that included a cover she'd drawn. And on that cover was a house, similar to one that appears in her book, Ruby in the Sky. Juvenilia can illustrate that writers have been dealing with or interested in the same subjects or themes all their lives. It can show how an interest evolved over a lifetime.

I came away from meeting Jeanne with a renewed interest in a juvenilia section for my website. Maybe that will be an objective for next year.


All Writers Can Gain From Other Writers, Part II

So, I get to this bookstore last weekend, introduce myself to Jeanne, and she thinks we've met before. She recalled that I was working on a project that involved a different story for every day of the year. Well, I was working on a project that was exactly that. (The 365 Story Project.) For her to have heard about it, though, we would have both had to have been at the Whispering Pines retreat together in 2010, because that was the only time I read from some of that material to a group.

My take-away from that experience was that none of the very sophisticated readers in that group got what I was trying to do with that manuscript. They didn't understand the whole story-a-day concept. As a result, I dropped that project. I cannabalized it and used some of the material in a middle grade mystery that a few agents and editors have shown some interest in, but the original 365-story-project was dead.

But Jeanne said to me last week, "I liked that idea. I've been watching to see if it made it to publication."

What? (Or quoi? because I've been watching French TV shows and that's my big French learn from that.)

As a result of  Jeanne's comment about the reading she recalled, I've found my 365 Story Project material, cleaned up the files, and am planning to go back to work on it next year. In the last ten years, I've become interested in flash fiction. Treating this as flash fiction for kids could make a big, big difference in how it works out. And I had an idea last week about the whole project that could  change everything.

Yes, I am ashamed that Jeanne remembered me, and I didn't remember her. But, man, I will remember her now.


Posted by Gail Gauthier at 6:53 PM
Email ThisBlogThis!Share to TwitterShare to FacebookShare to Pinterest

Love this! The 365-Day writing project sounds promising. You should definitely give it a try--or actually a re-try.