Me And Mother Jones, We've Got A Thing Going On

Until this spring, all I knew about Mother Jones was that it was the name of a magazine I'd never read and didn't know anything about, though I can tell you now that it does investigative journalism. Then this spring,  I was reading A People's History of the United States, and the author, Howard Zinn, starts in about "Mother Mary Jones, a seventy-five-year-old white-haired woman who was organizer for the United Mine Workers of America," I thought, Aha! That can't be a coincidence. And it wasn't. The magazine was, indeed, named for Mary Jones, known as "Mother" during her later activist years. 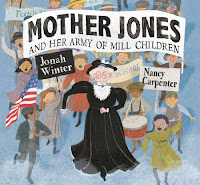 A couple of months after reading A People's History, I'm reading the March/April issue of The Horn Book and what do I see but a review of Mother Jones and Her Army of Mill Children by Jonah Winter with illustrations by Nancy Carpenter! The book deals with an incident that appears in both the AFL-CIO bio of Jones and the Mother Jones magazine material about her in which Mother Jones organized child workers in a march from Philadephia to President Theodore Roosevelt's home in Oyster Bay, New York.


Oh, And Since We're Discussing Introducing The Young To Adult Subjects...

A family member who is a middle school librarian brought  A Young People's History of the United States by Howard Zinn with Rebecca Stetoff  to my attention. It's a young adult edition of Zinn's original book. I would not say that this is the only history of the United States a young person, or anyone else, should read, but it certainly will give someone who already knows something about American history something to consider.