A Fun And Compassionate Book About Friends And Picky Eating

I  think The League of Picky Eaters by Stephanie V. W. Lucianovic could be described as a middle grade friends book. Main character Minerva recognizes that her long-time best friends are just plain toxic. (The main one has a mother who is pretty appalling, too, as mean girl moms often are in books and movies. Mean girls learn their mean ways at home.) Sadly, this is at the very point when Minerva is placed in a remedial class, where she eventually realizes she's found a group that embraces and understands her.

The remedial class Minerva is placed in is for picky eaters, children who don't meet the standards for eating in the slightly alternative world they live in. Like Rival, a YA mean girl book, The League of Picky Eaters is about something more than just school relationships. Rival was about singing, and The League of Picky Eaters is about...picky eating.

Picky eating is a real thing, and it is what brought me to this book after reading Lucianovic's adult book on the subject. We have three picky eaters in our family, one of whom has taken whatever this is--condition/eating disorder/food aversion--into adulthood. We've been dealing with it for many years. Picky eating isn't a dire, life-threatening issue. But it does cast a shadow over lives. We are an extremely food-centered culture. Meals and snacks are eaten at school, incredible numbers of social events are created around food or food is featured before or after them. Work meetings involve lunches, coffee and doughnuts (though all our picky eaters will eat those, or at least some types), dinners, and receptions. A simple book discussion group can end up meeting in restaurants. Dating is around meals. Oh, wait...traveling...means eating in restaurants. Any health situation that involves eating--gluten-related health conditions, diabetes, lactose intolerance, and, yes, picky eating--causes life complications for people affected and their families. 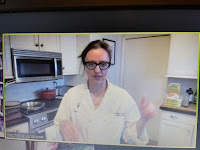 At last Sunday's book launch for The League of Picky Eaters, which I attended in Los Altos, California from my office in southern New England through the magic of Zoom, Lucianovic, a recovered/recovering picky eater, said she was twenty-seven-years old before she started making progress on her own picky eating. She went on to go to culinary school and eat, what sounds to me, like a remarkable number of things. She is every mom of a picky eater's fantasy. She wrote this book, she said, because in the area where she was living she was seeing competitive parenting around eating. And that led her to a book set in a school named for St. Julia Child where students are graded and tracked for their eating.

One of the big attractions of this book for me is that our main character doesn't experience some kind of eating revelation. Characters changing is a simplistic, quick-and-dirty writing rule/tip thrown around in many how-to articles and intro-writing workshops. Minerva's life does change in a realistic and positive way. But it's not around her eating, which is also realistic. I haven't seen or heard of a lot of that happening with picky eaters.

The League of Picky Eaters is entertaining and interesting, because it's about something we don't see a lot in children's books. (I don't know if I've seen it in any fiction.) My concern for the book is that adult gatekeepers won't be familiar with picky eating and not realize what Lucianovic has done here. Stephanie Lucianovic ran her launch party from her kitchen where she made a grilled cheese. Grilled cheese figures prominently in The League of Picky Eaters, because it is an acceptable, even loved, food for many picky eaters. Yes, yes, we know grilled cheese well here. In fact, someone mentioned it just yesterday.