Not Thinking of Myself for Once 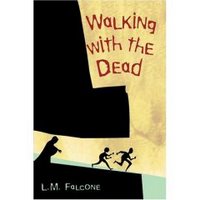 I had an interesting experience while reading Walking With the Dead by L.M. Falcone. I was actually able to stop thinking about what I like and think, for a moment, about what a kid might like.

I've been talking about doing a mummy book for some time so when I saw Walking With the Dead, which I thought involved a mummy, at a local library, I worried that someone had beat me to my story. I immediately checked it out. I was reassured when I found out that this mummy appeared to be Greek, not Egyptian, so, of course, we were talking about two totally different things. I was also reassured because I didn't care for the book much. The realistic parts of the story seemed farfetched and weak, with the characters just walking from one incident to another.

However, once the book got to the "walking with the dead" part, things became more interesting. Alex, the main character, and his cousin, end up going to the Underworld as it is portrayed in Greek mythology. This should have been the really improbable part, but I liked it much better. I don't mind improbable things when they should be improbable.

I was reading along, recognizing some figures from my youthful studies of Greek mythology, when I suddenly experienced what for me was a deep insight: If I were a youthful person who was studying Greek mythology, I might really enjoy this book. To see a modern day kid interacting with all this old stuff that I was having to learn might make it much more attractive to me.

Not that mythology is unattractive. I seem to remember liking it when I was young. However, I haven't retained all that much, so I can't vouch for Falcone's accuracy. Nonetheless, this might be a title teachers and school librarians should take a look at and have on hand for students who find the Greeks a snooze. And even those who don't.

This book was published just this year. I mention that because as a general rule I miss new titles.
Posted by Gail Gauthier at 6:29 PM
Email ThisBlogThis!Share to TwitterShare to FacebookShare to Pinterest