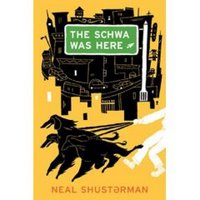 The opening pages of The Schwa Was Here by Neal Shusterman have an elegy-like quality to them that made me think "Uh-oh. I see a dead person coming." I don't think it's giving anything away to say that I was pleasantly surprised.

We've all known people who no one notices. Some of us have been those people. Shusterman plays with the idea of a person (the Schwa) who goes so unnoticed that he's nearly invisible. The situation he creates almost goes too far. In fact, for a long time as I was reading this book, I thought it was science fiction. I was hoping that the Schwa's mother, who has disappeared, had been kidnapped by aliens and that he was the product of a human and alien relationship. Nonetheless, everything about the Schwa is intriguing and workable.

I actually like the Schwa and his friend Anthony, the narrator of this book. I like building a story around people who rarely have books written about them.

My complaint...you knew it was coming, didn't you?...is that I felt there were two separate stories in this book. It reminded me of Gennifer Choldenko's Al Capone Does My Shirts. Both books have a really interesting premise, but then the authors feel they have to add another storyline about family problems. In The Schwa Was Here, it isn't even one of the two main characters'families. The boys get involved with a stereotypical cranky old rich man (a type that goes back to Little Women, and for all I know Alcott got it from someone else) who is isolated in his house. The guy has a spunky granddaughter...who is blind. These complications really had very little to do with the Schwa. They felt like filler.

I'm a big believer in staying on task. Decide what you're going to write about and stick with it.

Read The Schwa Was Here for the Schwa and ignore Old Man Crawley and his granddaughter.
Posted by Gail Gauthier at 8:14 PM
Email ThisBlogThis!Share to TwitterShare to FacebookShare to Pinterest

Did'nt agree with your review at all first, Lexi did play a huge role in the book. Not only did she cause a collaps in anthony and and schwa's relationship but also, she could see the schwa and made him fell as a person who could be seen for a breff moment.