An Edgy Tale Of Little Outcasts 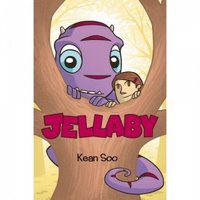 Superficially, Jellaby, a Cybils nominee for elementary/middle grade graphic novel by Kean Soo, is a traditional story of the unhappy, isolated child who bonds with some kind of similar outcast. This particular story has considerably more edge, though, in large part because our protagonist, Portia, isn't a stereotypically sympathetic child. Sure she is a fatherless child who has nightmares. But she can be plenty demanding and argumentative, especially regarding Jason, the other class misfit, who you'd expect her to buddy up with.

Those eyebrows...that mouth...This girl is drawn in such a way that makes it clear that she's comfortable putting up a fight.

One night after a bad dream, Portia finds a purple creature out in her yard. Feeling pretty confident that the thing isn't going to eat her (I'm so glad she's the kind of kid smart enough to realize that's a possibility), she takes him in. He's sort of her special pet, one that is a bit nicer than she is and encourages her to help out Jason when he's attacked by bullies.

And so our three outsiders are brought together and end up on a journey to learn Jellaby's origins. Portia's nightmares about her missing father suggest they might learn something about him, too.

This is a graphic novel that does a good job of combining its graphics and text. The story is shown totally through images and dialogue. I didn't see any boxes of narrative.

It is, however, a serial. There isn't anything remotely like a complete storyline here. That's not a drawback for those who enjoy serials, but it does mean that it's hard to make any kind of comment on the quality of the overall work because the entire work isn't here.

What is here in this first volume is engaging and easy to read for elementary and younger middle grade readers.

The second book in the serial, Jellaby in the City, will be published in April.
Posted by Gail Gauthier at 4:04 PM
Email ThisBlogThis!Share to TwitterShare to FacebookShare to Pinterest
Labels: Cybils, graphic novels, Reader response