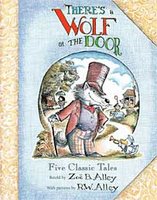 There's a Wolf at the Door: Five Classic Tales, Retold by Zoe B. Alley and illustrated by R.W. Alley, is another of the Cybils finalists for elementary/middle grade book in the graphic novels category. It's a graphic charmer, though I don't know that I'd call it a novel. It's more of a collection, as its subtitle suggests.

In this book, five "wolf" stories are linked together--The Three Little Pigs, The Boy Who Cried Wolf, Little Red Riding Hood---You get the idea. The same wolf moves from story to story, always getting the worst of any situation he finds himself in. The retelling of these stories is witty (the sheep in The Boy Who Cried Wolf keep up a running commentary on their young shepherd, for instance.) The book is the size of a picture book, meaning the panels are large, which should be a help for young readers.

A couple of quibbles--There's a lot of narrative in the panels. The images aren't left to tell the story. They often end up illustrating narrative instead. And, oddly enough, there are often dialogue tags. Instead of using a dialogue balloon above a character to indicate he's talking, dialogue will sometimes appear in a circle or a square with quotation marks and a tag, as in "Give it your best shot," said Blake. It's almost as if the author and illustrator weren't interested in creating a "true" graphic novel type of work but more of a traditional picture book in panels.

And that's okay. The book is entertaining and attractive, whatever it is.

Last fall someone commenting here raised the question of whether or not graphic novels could be read aloud. I think adults reading with one or two children could make There's a Wolf at the Door work as a read aloud, particularly if they stuck to just one tale at a time.
Posted by Gail Gauthier at 6:23 PM
Email ThisBlogThis!Share to TwitterShare to FacebookShare to Pinterest
Labels: Cybils, graphic novels, Reader response