I haven't done a time management reading project in a while, so I'm psyched for this one. 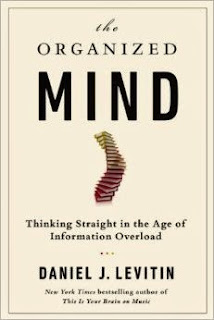 I stumbled upon The Organized Mind: Thinking Straight in the Age of Information Overload by Daniel J. Levitin at the library and picked it up because it has a chapter called Organizing Our Time. I was reading that when I decided I'd better go back and look at some of the earlier chapters. So I'll be seeing what I can pick up from this book that could relate to writers managing their time.


Levitin is a cognitive psychologist. He describes cognitive psychology as "the scientific study of how humans (and animals and, in some cases, computers) process information." Among the areas of study cognitive psychology covers are memory and attention. Attention relates to staying on task, an issue for managing time. I'm wondering if memory won't be a factor for organic writers, which, I know, veers off from the time management topic. I may be addressing that more later as I'm reading and thinking about this book.

In his introduction Levitin says that "successful members of society" have "learned to maximize their creativity, and efficiency, by organizing their lives so that they spend less time on the mundane, and more time on the inspiring, comforting, and rewarding things in life." Yes! Get me some of that!

An Evolutionary Theory For Writing Process


He has another interesting line in the intro: "Evolution doesn't design things and it doesn't build systems--it settles on systems that, historically, conveyed a survival benefit (and if a better way comes along, it will adopt that.)" This sounds to me like a way to think of writing process and managing time.

There is no grand design or system we can learn in graduate school or at conference workshops. Instead, individuals have to settle on a system that has, within their personal history, worked for them. And if they're smart, they'll maintain that zenny mind of a beginner I'm so fond of and adopt any new, better systems they happen upon, too.

Writing process and managing time evolve over the course of our work lives.