Last spring while at the NESCBWI Conference I attended a workshop called Blueprinting Your Novel or Short Story with keynote Wendy Mass. This workshop described a way of coming up with chapter ideas and then developing them. It involved generating material with who, what, when, where, why questions in a very structured way and getting this material together before you start writing.

Once again, know as much about your story as possible before you start writing, because that's how you write fast. Writing fast is a great way of getting the most out of your time during National Novel Writing Month.

What's Significant About This?

There are two well-known story generation plans that I've seen discussed on-line and in books. I saw the second one used in a workshop:
The "blueprinting" Wendy described last spring sounds as if it involves using ideas you already have to create a plot and then a whole story. You have the opportunity to create something unique that doesn't follow a pattern. And after I've tried it with the project I'm developing this month, I'll let you know if it does what I think it will. 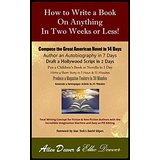 The blueprint Wendy describes in her workshop, which is very well done, was developed from a book called  How to Write a Book on Anything in Two Weeks or Less! by Allen Deever and Ellie Deever. The book appears to have been published originally in 1993, and is now only available in an e-book edition. A search for the authors turns up more how-to writing manuals and some freelance-type articles, also from around 1993. It's not much of an exaggeration to describe How to Write a Book and its authors as obscure.

I read the e-book edition, which probably wasn't the best format. The book has a lot of directions to move ahead to this chapter or that, which I find awkward with an e-book. Additionally, stylistically the writing has what I'm going to call a Trumpian tone. "Prolific author-in-the-making, be advised that you are about to break new ground in the field of writing." "What's contained in this book is completely new technology and new philosophies concerning the production of great stories in the shortest time possible, which is a technology that has never been been available to potential writers." "Consider this book to be your own personal story consultant. It does everything you would ever want a consultant to do and at a fraction of the cost."  There's pages and pages of this stuff. The authors go on at some length about the positive things their book, the one you are reading, will do for you. They don't actually say, "It's going to be great," but there's definitely that kind of vibe. Additionally, there are some elaborate and nitpicky sections I skipped.

But then there's this material that I haven't seen before, that no one, except for Wendy Mass, is talking about. It's as if these people may have been on to something somewhere in that book, and then it got lost. What if they had created a fantastic writing program but couldn't convey it to others? And their book went out of print? And everybody embraced the Hero's Journey?

In a few months (Not two weeks as the book's title promises, because I don't do anything in two weeks), I'll come back to this subject, once I've tried using the system myself. No matter how it turns out for me, if you see that Wendy is running this workshop at a writers' conference, attending would be a good use of time.

Posted by Gail Gauthier at 12:54 PM
Email ThisBlogThis!Share to TwitterShare to FacebookShare to Pinterest
Labels: How to Write a Book, time management for writers, Time Management Tuesday