I grew up in central Vermont, as my loyal readers probably know. I headed a little further north in the state for college. I've lived all my adult life in central Connecticut, which is southern New England, which often is no stranger to rough winter weather. That backstory explains, I hope, why I have a love/hate relationship with snow. I love snow if I can be inside watching it or outside frolicking in it for a bit. I hate it if I have to travel through it, either as a driver or a passenger. I hate it if any family members are out driving in it.

By which I mean driving through a snowstorm.

I found  Five Total Strangers by Natalie D. Richards intense and disturbing, which is what any writer wants from a reader, totally because it involved five people driving through a snowstorm. The main character is a teenage girl on her way home for Christmas who accepts a ride from a slightly older young woman she'd met on a plane that had just landed. Their airport is now shutting down because of an expected snowstorm, and older woman has rented a car and offered rides to four people, including our narrator. None of them know one another.

I stayed up too late reading it one night. All because of the snow.

There is a secondary story line related to a stalker. I don't think that was necessary. This could have totally worked as a snowpocalypse survival story.

Oh, on top of the snow issue, these strangers were driving through Pennsylvania. I've driven in Pennsylvania in the fall, not the winter. I don't know if I have been on one of the highways named in the book, but I find whatever Pennsylvania route we always end up taking when we're going to the Midwest an ordeal, because the exits are few and far, far between. All I can think of when I'm on that highway is how long it would take emergency vehicles to arrive in any kind of weather--on a beautiful summer day--because it's been so long since we passed the last on-ramp and there's no sign of another one. 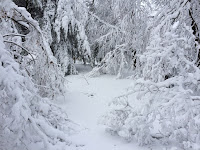 I'm getting stressed just writing this. I believe anyone who's lived in a northern state would. I don't know of anyone old enough to have a driver's license who doesn't start hunting for help from a higher driving power when a snowstorm is predicted.

Well, except for my late Uncle Gerry who worked for a public works department. I once heard him refer to snow as white oil, because of all the over time he collected--driving a snowplow.

Posted by Gail Gauthier at 2:23 PM
Email ThisBlogThis!Share to TwitterShare to FacebookShare to Pinterest
Labels: 2020, Reader response, thriller, YA