I just finished up another May Days, that month of the year when I get together with some Facebook friends to set aside a time, in this case the month of May, to work on something special. For some people it's finishing a draft, for others it's editing, or getting started on something new. Our leader checks in once a week with encouragement. There's a lot less enthusiasm at the end of the month than there is at the beginning, but, nonetheless, a good-ish time is had by all.

I use the term set-aside time for blocks of time set aside for a special project. You see them a lot in writing. National Novel Writing Month is a famous one. Last November I wrote flash for a month. Last summer I wrote it for six weeks while taking a flash writing workshop. I've been doing May Days for years, and my May group gets together in October to do it again.

Set-Aside Times have a couple of benefits.

My Plan For May Days 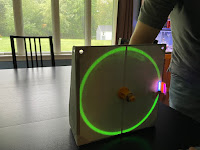 For this year's May Days my goal was to get through first drafts of 3 chapters, which I thought might get me to an important turning point in the story. Recently I had only been doing 2 chapters a month, so this would be a push. I wasn't thinking in terms of writing every day or of writing a certain number of words. I was thinking in terms getting to a certain point. 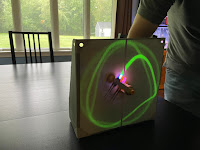 As so often happens for me, I started May Days unable to work for the first four or five days of the month to tend to family. I can't even remember how long I had to put off starting, but it was a significant chunk of time.
I was experiencing my old friend, chaos. I took a breath, didn't give in to the what-the-hell effect, began again, and leaned on whatever other tricks I'd learned for dealing with chaos.
Then I learned another one, which I'm calling Living Chaotically. 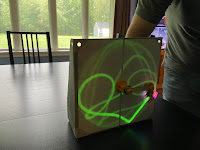 Remember, I was only thinking about getting to a certain point in my manuscript. The only way to get there, I decided, was to give in to the chaos and give up my weekends. If I couldn't get to the end of a chapter or some other good stopping place by Friday, then I would have to give up the order I've established in my life--no working on weekends--and get to those points by working then. Essentially, I was adding more chaos.
But only for the month of May. I thought I could live with this kind of chaos for one month. And I could.

What Did I Get For Living Chaotically?

Since I am a big believer in not pushing through to the end of a first draft when you know something's wrong, that was exciting rather than despair-making. Beginning again, in my experience, always leads to moving forward.

So I was very happy with my May Days. I got some significant work done, but more importantly, I found a method I plan to use again to deal with and become comfortable with chaos.

Posted by Gail Gauthier at 9:38 AM
Email ThisBlogThis!Share to TwitterShare to FacebookShare to Pinterest
Labels: chaos, May Days, set aside time, Time Management, time management for writers, Time Management Tuesday