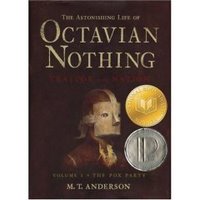 As a result of the Adbooks discussion of M. T. Anderson this month, I finally read The Astonishing Life of Octavian Nothing, Traitor to the Nation. I am going to have to struggle to control myself, because I'm afraid I'm going to start gushing. The book, itself, is pretty astonishing.

Octavian Nothing is the son of an African princess who is being educated by a group of American Enlightenment philosophers who might be described as having gone slightly round the bend. Octavian and his mother live among them, and he is being given a classical education. As a child, he is totally unaware that he is part of an Enlightenment research project. He is totally unaware that he is, in fact, a slave.

But he becomes enlightened on those points.

The book is written in the style of an eighteenth century collection of memoirs and letters. Three portions of the book are told in Octavian's first person voice, from his "Manuscript Testimony." He appears to be recalling his childhood and adolescence from an adult (though not aged) viewpoint. (I was under the impression that this was the mark of an adult book rather than YA, but that's just a trivial point.) One part is told from the viewpoint of a young New Hampshire soldier through his letters to his sister. (Though this young man is charming and I did enjoy this portion of the book, I wonder whether or not it was necessary to switch points of view. Once again, this is a trivial point.)

The writing style is demanding, but the character is so engaging and the story so compelling that I got used to it. Fast. In fact, I read books of this type as a teenager because I was a teenager so very long ago that there weren't a lot of YA books around. So I did dip into older books. It doesn't seem alien to me for teenagers to be reading something this outside their world. I'm sure that many are reading things just as demanding in their English classes, especially if they're doing Advanced Placement.

Perhaps I took to the book because I've done some research on the period and am still psyched about the Enlightenment and smallpox, for instance. Octavian Nothing makes clear that the American Revolution was a revolution that wasn't for everybody. It certainly wasn't for the American slaves, but it also wasn't for many small farmers living in wilderness areas. The Revolutionary Generation was very much into the status quo. They just wanted their status quo to be American, not British.

Excuse me for getting all rebellious, but as I've said before, I suspect I had ancestors running through the streets of Paris in the 1790s screaming "Off with their heads" in some kind of farm French. (Coupez les tetes?)

Anyway, loved this book. It's described as Volume 1, and Anderson is working on a sequel. Just before reading it I was thinking about the whole series/serial thing that is so popular now, and wondering if it appeared anywhere but in fantasy. Well, here we have at least a two-part series in a historical novel. We'll have to see how far it goes. Though, really, in a way the ending to the first volume is satisfying.

I hope my local bookstore has an Octavian party when the next book comes out. I'd go.

If you read the book and are curious about pox parties, read more. Thanks to Adbooks for the link. Also, M.T. Anderson was interviewed on NPR back in January. Listen for the interviewer's question about whether teen readers will be enlightened or frightened by the book. I thought that question suggested a lack of knowledge of YA, myself.
Posted by Gail Gauthier at 3:45 PM
Email ThisBlogThis!Share to TwitterShare to FacebookShare to Pinterest
Labels: historical fiction