Sexual Politics For The Very Young

Last Saturday I happened to read two books for younger kids that dealt with sex role stereotyping. Both could be said to deal with cliched situations. One just did it much better than the other.

The first book was part of the Black Lagoon Adventures I mentioned earlier this week. Like the other Black Lagoon book I read, it has very little plot. The book is primarily a list of jokes.

In The Class Election From The Black Lagoon Hubie,the male main character, is running against Doris for president of their class. Hubie is extremely concerned about the consequences of losing to a girl. He goes on for three pages about letting down every boy in the school, sounding very much like a mid-twentieth century sitcom. A joke from the '70s about long-suffering men sounds very adult:

"We shake hands and she goes first. She says that she's for women's rights and total equality. I ask her why she gets to go first.

Will a child even get that?

Hubie manages to win, though I don't know how since Doris had clearly bought the election. Hubie says of her, "I want her in my cabinet, or even better--I'll make her my first lady."

I was quite horrified by that suggestion, though after a few days of thinking about it, I'm willing to concede that perhaps it was supposed to be a sign of romance blooming between the two characters. Nonetheless, while I know that children go through a stage when they prefer the company of their own kind, things have deteriorated at the elementary school level since I was a room mom if this book reflects reality. 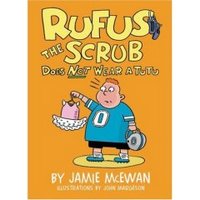 Rufus the Scrub Does Not Wear A Tutu by Jamie McEwan also deals with a cliched situation, that of the male athlete who chooses to try an activity not traditionally associated with men. What Rufus has going for it is a real story, even if it is one that will be familiar to adult readers, and the recognition that its audience is living in the twenty-first century.

Thus when the coach gives Rufus a hard time for leaving football practice early to go to the ballet class he's attending to help with his clumsiness, Coach's main gripe is that the kid isn't putting football first in his life and not that he's behaving in an effeminate manner. Rufus's own friends don't want him to quit ballet. Ballet isn't as wimpy as quitting it because some of the players give him a hard time. And Rufus has a logical reason for liking the ballet class--the younger, smaller girls he takes it with like having the older, bigger boy there so he can lift them. It makes sense that that would appeal to Rufus's self-esteem.

I thought there were a few too many similar, undeveloped characters in Rufus, and evidently it's being marketed as a middle-grade book, though it seemed much younger to me. Still, it's a complete story that deals with gender issues that young kids actually face--namely, what are boys supposed to do and what are girls supposed to do and are we all just stuck with that situation?

The answer in Rufus the Scrub Does Not Wear A Tutu is no.
Posted by Gail Gauthier at 7:56 PM
Email ThisBlogThis!Share to TwitterShare to FacebookShare to Pinterest
Labels: Books for Younger Kids

Thanks for the lead!I just put "Rufus the scrub" on my shopping list. Some of my students are, to my way of thinking, somewhat gender-role challenged -- maybe it will help.

That's wonderful. The author is new to me, though he's written other books, and I'm happy to direct some attention to his work.