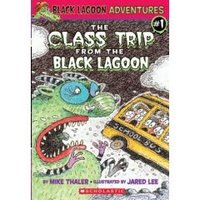 Books For The Younger Ones--Part III
As part of my early reading mission, I picked up a couple of Black Lagoon Adventures by Mike Thaler and Jared Lee. This series is part of what seems to be a pattern--books that depend heavily on word play.

The Black Lagoon Adventures seem to be more sophisticated than the other books of this type I've read. There's less reliance on funny-sounding words or toilet humor. In fact, the jokes are directed to your more literate third graders. For instance, you have to know who the Wright Brothers were in order to get a Wrong Brothers joke and "closet-ra-phobia" is going to be lost on a child who isn't familiar with the word claustrophobia.

And I have no idea why "Black Lagoon" appears in the title. It was never mentioned in the two books I read.

After dipping into the kiddie pool at a couple of local libraries and coming up with four books on the new shelves all pushing gimmicks and jokes, I'm wondering what's going on. Did I just have bad luck? Four, after all, isn't a statistically significant number. Or is there some reason why puns, idioms, and palindromes are so important for child development that they trump the basic elements of fiction?
Posted by Gail Gauthier at 8:25 AM
Email ThisBlogThis!Share to TwitterShare to FacebookShare to Pinterest
Labels: Books for Younger Kids