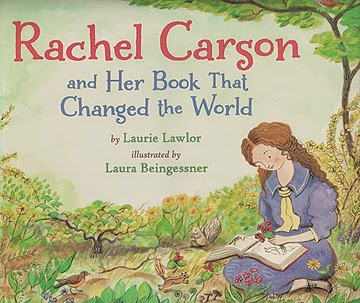 I found another good book for our club.

I didn't expect to like Rachel Carson and Her Book That Changed the World by Laurie Lawlor with illustrations by Laura Beingessner as much as I did. Picture book bios are often problematic to me. They sometimes seem too old for picture book folks, too young for older ones, so who are they for? This one, not so much. Definitely for mid-grade school readers. Maybe third or fourth grade.

The first thing that struck me about this book is that very early on we hear that Rachel as a child explored the outdoors by herself and had a mother who had an interest in nature. This child got her start without any formal environmental instruction, such as we would want for children these days, and, yet, she turned into Rachel Carson.

Another thing I liked about this book, and, yes, this is just me, is that it describes a woman's story. Carson as a young woman had needy family to deal with. As often happens with achieving women of her era, she had help. In her case, her mother hustled to pull together money for school. She was encouraged by a female college professor. A male superior at the Bureau of Fisheries advised her to submit work to The Atlantic. She was a professional woman without a personal family. If you read the Epilogue, you'll find that after Silent Spring was published critics referred to her as "an hysterical woman." Someone asked "why a spinster with no children was so concerned about genetics."

Okay, so maybe I got into this story because of the feminist angle I read into it. But, really, the part in the beginning about simply growing up enjoying the outdoors was very significant, too.

Love the period illustrations, too.