My Christmas In Books, Part I

I'm going to have to ease myself back into blogging, so I'm going to start with a simple list of my Christmas book purchases for family members. Because that's fun, for me, anyway. I was excited about a lot of these books, but held off writing about them because I do have a couple of relatives who stop by here occasionally. 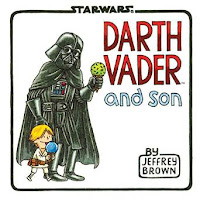 Darth Vader and Son by Jeffrey Brown. This was the perfect gift for our young father of a three-
year-old boy. How perfect was it? Someone got it for him for his first Father's Day. It was, however, the only case this Christmas of people receiving a book from me that they already had.

Bossy Pants by Tina Fey. I listened to the audio edition of this book. It's not just show business talk. There's some contemporary life essays here that I thought would go over with one of our young women. She seemed pleased.

Redshirts by John Scalzi. I was really excited about this one. Some low-ranking crew members on a starship realize that a large number of their colleagues are killed while on away missions. It appears to be a parody of that issue on Star Trek. I gave it to a relative who has more than 200 Star Trek novels in our basement. He didn't seem as taken with the whole concept as I was. You know, if you've read 200+ Star Trek novels, you may not be interested in funny ones. I, however, am. I may try to read this thing at some point.

The Comedians: Drunks, Thieves, Scoundrels and the History of American Comedy by Kliph Nesteroff. We have a family member who is a TV archivist/historian, and The Comedians includes TV. Our archivist also received Best Television Plays, edited by Gore Vidal, which I picked up in a used bookstore in Michigan this fall. I was happy with how these were received.

The Cuckoo's Calling by Robert Galbraith, who is really J. K. Rowling. Our middle school librarian is a big Harry Potter fan. This seemed like a good match. In the Garden with Van Gogh by Julie Merberg and Suzanne Bober. I went to a Van Gogh exhibit this summer and got this in the museum gift shop. I gave this to someone who is much more interested in trains than he is in art. So I also gave him a signed copy of Train by Elisha Cooper.

Christmas isn't quite done here. I'll be giving another six books to other relatives next weekend. So My Christmas In Books will continue in about a week.