We'll See Where I Go With This 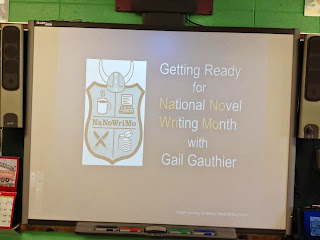 Today my new author talk, Preparing for National Novel Writing Month, Elementary School Edition, made its debut. Things went very well. This photo of the Smart Board I used in a fourth grade classroom doesn't begin to do justice to the slides Computer Guy made for me.

This program grew out of the time management for writers work I've been doing for this blog for several years. My reading on doing more with the time you have, in particular, as well as the studying I've done on plotting over the years (Hmm. I've done a lot of writing about that here.)
became my material for this presentation.

Writer Joanna Penn is well-known on the Internet where she writes about and is interviewed about writing, self-publishing, speaking, the writing business, and all variations thereof. Penn is a speaker and sometimes discusses public speaking as an income stream for writers. (See the preceding paragraph and children's writers in schools.) But I've also either heard her talk or read her writing on using speaking as a way to support writing in less tangible ways. "...being a speaker," she has said, "really helps being known as a thought leader..." I have little ambition to the thought leader title. Close to none, actually. But I do realize that "being known" makes a writer more marketable and more desirable to agents and publishers.

I am between books right now. While I continue to write and submit, it would be very useful if I could also maintain a presence in the childlit world, even if only locally/regionally. Speaking could be a way to do that. A children's writer who doesn't have print books available for book sales isn't going to get traditional speaking engagements at schools and libraries. What kind of speaking could I do that would keep me known among teachers and librarians? I realized this summer that I had the Situational Time Management Workshop I ran for the NESCBWI last year that came about because of my Time Management work here and that some of the work I've done here would also apply to National Novel Writing Month.

So the blog may lead to speaking, which could lead to promotional/income opportunities. I will keep you posted.