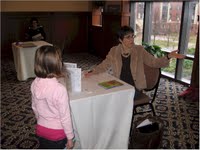 This year's Connecticut Children's Book Fair was a great day for me. My presentation went well, pretty well attended and with me coming in under the twenty-minute time frame I had been given so that the audience had time to ask questions. Plus my PowerPoint slides were some of the nicest I saw because my computer guy is an artist.

For my signings I was set up between Pegi Deitz Shea, who I've known for years, and P.W. Catanese, who, I learned when attending his presentation, has sold over half a million books. Pegi has a new book out Noah Webster, Weaver of Words, illustrated by Monica Vachula. Very attractive. And Paul (see, I'm among those people who know the "P" in "P.W." stands for Paul) has a new series, The Book of Umber.

Leslea Newman did a great presentation about her book Hachiko Waits. Marc Tyler Nobleman's talk was terrific, too, especially when he started in on Superman because who doesn't love Superman?

Remember Janet Lawler, whom I mentioned back in September? She is my new B.F.F. We bonded in the green room and then ate dinner together in the evening.

I also met the children's services librarian who maintains Jacket Whys a blog on Children's and YA book covers. I won't out her by giving her name (though I'm among those people who know it) because she doesn't use it in her "About" section.

Before I left the house yesterday morning, I explained to a family member that I hadn't invited anyone to attend the dinner with me because I didn't want anyone to see how poorly I schmooze. He agreed that it would be a painful thing to watch. However, I pretty much schmoozed all day (except for an hour break late in the afternoon when I did some more reading of Walden at the library.) I even made it through the forty-five minute pre-dinner cocktail ordeal pretty much unscathed, too.

Oh! Oh! Lois Lowry ate dinner at the table next to mine! I didn't notice until dessert, though. I had a camera in my bag, and I could have tried to sneak pictures of her, but it would have been tacky. Someone asked me if I could give Lois (I'm not among those people who can call her Lois, but she'll never know.) instructions on how to get back to her hotel, and I offered to give her a ride. But by that time, she'd already left the building. It was just as well, because while I know I could have gotten her there (it was within walking distance of the Dodd Center, where we ate), it might have taken me a couple of shots to find the right tiny, cramped road to turn onto.

So I left feeling very professional and more positive about work than I have been, but then...but then...but then I ended up spending an hour and a half or so in a hospital emergency room in the middle of the night with one of the elders!

Where, I am ashamed to say, I read still more of Walden while he was off having tests. And I read more of it today after we brought him home.

What a wild ride, huh?
Posted by Gail Gauthier at 6:12 PM
Email ThisBlogThis!Share to TwitterShare to FacebookShare to Pinterest
Labels: author appearances

Sounds like you had as good of a day that day as I did! I had a great time "schmoozing" with... well... YOU! and some of the others who were there.
You gave me lots to think about in terms of the state of the business (publishing). So thanks!
And thanks for mentioning my blog, too.