In Chicago With Jamie Sumner

On Wednesday evening I was in the audience for a virtual interview with author Jamie Sumner, supporting her new middle grade release, Tune It Out. The event was sponsored by Anderson's Bookshop in Chicago, and one of its employees served as the interviewer. I, of course, am in Connecticut. Another great opportunity for me to
get out and about without changing out of my yoga pants or even putting on a clean shirt. I did put on some earrings. Did I comb my hair?

Tune It Out is about a girl with a strong musical talent. It's a talent that could very possibly take her places. But she also has sensory processing disorder, which could make it very difficult for her to deal with the kind of life that goes along with being a successful musician.

Couple of interesting points Sumner made:

Jamie Sumner has a child with cerebral palsy and sensory processing disorder. She's written extensively about special needs parenting. She also has three more middle grade books coming out over the next three years. One Kid's Trash will be published in September, 2021.

She's very well spoken and was an excellent interviewee. I believe she has other virtual events lined up for Tune It Out, though I can't find information on them now. If you stumble upon news of one of her virtual appearances, it would be worth your while to attend--from anywhere in the country! All you have to do is figure out the time difference. She was speaking at 5 in Chicago. I was watching from my cellar in Connecticut at 6.

Anderson's Bookshop, which hosted this interview, is interesting. It has been in Chicago since the 1870s, and it might be family owned. One of the staff members said they usually host 400 author events a year, and they're working on developing a virtual calendar.

New England picture book author Josh Funk will be making an Anderson virtual appearance on the 26th of this month.

Some Reading For Hispanic Heritage Month

Posted by Gail Gauthier at 8:22 AM No comments:
Email ThisBlogThis!Share to TwitterShare to FacebookShare to Pinterest

Though I can't claim to be a fan of your basic Cinderella story, I do seem to be drawn to Cinderella variations.

My most recent Cinderella read is Geekerella by Ashley Poston, in which our heroine is a second-generation uber-fan of a cult TV show. She's not looking to attend a ball, but a cosplay contest at a con. Her prince is a young actor playing the hero in a movie version of the TV show. They have a Pride and Prejudice thing going on, in that when they originally meet, it's dislike at first sight. Readers might also think of You've Got Mail, since their relationship develops in a similar way.

At one point, I found the evil stepmother and stepsister a little over the top. And then I thought, This is Cinderella. Of course, they're over the top.

Ashley Poston has two other fairy tale updates set in this universe. The most recent, Bookish and the Beast, was published last month.

Posted by Gail Gauthier at 1:36 PM No comments:
Email ThisBlogThis!Share to TwitterShare to FacebookShare to Pinterest
Labels: 2017, Cinderella stories, Reader response, romance, YA

More adventures in pandemic publishing. It's an adventure for all these authors, at least.

I find my titles through social media or other blogs. A number of this month's books came from Ms. Yingling Reads, who does a really impressive job of reading new books. 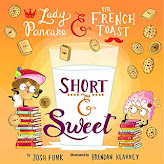 Posted by Gail Gauthier at 12:48 PM No comments:
Email ThisBlogThis!Share to TwitterShare to FacebookShare to Pinterest
Labels: 2020 books

I have a couple of younger family members who have recently been purging their homes of unnecessary material items. Yes, indeed, it seems the acorn doesn't fall far from the tree, since I did something similar for an entire month. Three times.

I am a big, big believer in less being more and that living with mass quantities of things around us has a very big impact on how we're able to use our time. It's especially true for those of us who work at home. And there are more of us these days.

So what's been going on with my family inspired me to round up some OC posts on the purging we did here over the years, including the research that supports backing a truck up to your house and filling it up.

"...during the month of October I divested my home of one item a day because 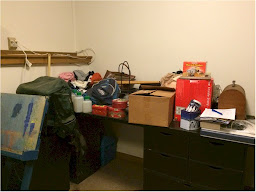 "We did, indeed, each find an item a day in October to get out of this house. That's sixty material possessions we don't need to spend time dealing with. That's more than 22 cubic feet of belongings that won't cause disorder in our lives, leading to self-regulatory failure. Seriously, someone (not mentioning any names, Civil Guy) measured the heap, did some calculations, and came up with 22+ cubic feet. Evidently that's not much when you're talking loads of gravel or concrete. But we're talking stuff." 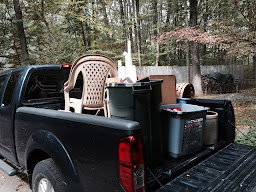 een this year's purge and other years' is that our month of purging ended, but we didn't stop. We're still working on the shelving in the living room. Wish I'd thought to take a before picture of that. We got rid of some items from the kitchen just this past week, and I have my eye on something in my office. In fact, some serious shuffling of office material could be in my future."

We haven't had an annual purge here at Chez Gauthier in three years. We haven't eliminated all unnecessary material items from our lives, by any means. But we consider ourselves minimalists and trying to live a minimalist lifestyle is a daily effort now, not an annual one. We're always getting rid of things. We're always thinking about what we want to purchase, bring into our home, and live with. This philosophy even impacts our gift giving. I, in particular, am very mindful about how much I saddle others with in the form of gifts.
I do think possession purges have had a positive impact on my work output. But I'm always looking to get rid of more, so I can do more.
Posted by Gail Gauthier at 8:33 AM No comments:
Email ThisBlogThis!Share to TwitterShare to FacebookShare to Pinterest

A Mini-Binge Possibility For Regency-Era Comedies of Manners

I recently wrote about a binge-worthy trilogy, Truly Devious. Now I have a two-volume binge suggestion, this one dealing with the Regency-era-women-looking-for-husbands.

I am a fan of Patrice Kindl's Keeping the Castle, a book I thought had the Regency romance set up with a modern twist, because the young woman main character was...

"...all business, not romance. She's out to use her beauty, which she knows won't last long, to score a wealthy husband who will save her family's dilapidated castle home, thus providing for her mother and very young brother, as well as all the people who work for the family. A lot is riding on her. She's a lot like the female lead in a contemporary YA novel who is intent on going into a profession. The outsider male in this case isn't a rogue, as you find in the old-time romances. He's an outsider because he can actually do something. In this aristocratic world, doing nothing because you've inherited wealth is held in higher regard than being smart enough to make a buck."

Kindl did a second book set in the same world and described as a "companion volume to Keeping the Castle." A School for Brides involves a girls' boarding school where the students are being educated to become wives, though the area is woefully short on husband material.

I found this book a little heavy on characters and their story lines. I would have been happy if some of those characters had carried their own books. However, as I got closer to the end, the skulduggery and romance provided a lot more narrative drive.

It's been so many years since I've read Keeping the Castle that I didn't realize A School for Brides included some characters from the first book until I was reading up on it in order to write this post. Read the books one after the other, so you don't miss anything the way I did.

By the way, I also liked Patrice Kindl's Owl in Love, which is very different from Castle and School.

A little over a week ago, some Facebook friends and I were discussing my mantra "When I am exhausted and overwhelmed from too many tasks, I choose one to complete. One that can be completed." Or, to put it in a less unwieldy manner, "Finish something."

As a result, friend Susan Barlow--yoga and tai chi instructor, historian, and serious walker--sent me the poem The Poet's Occasional Alternative by Grace Paley, which appeared on The Writer's Almanac last month. The poem, she felt, reminded her of our discussion, because it dealt with "doing one do-able thing and allowing that to be enough."

In an attempt to respect the holder of the copyright on this poem, I'll just give you some samples and urge you to seek it out yourself for the full reading experience. It begins:

I was going to write a poem I made a pie instead      it took about the same amount of time of course the pie was a final draft      a poem would have had some distance to go
Towards the middle Paley says:
the pie already had a talking tumbling audience among small trucks and a fire engine on the kitchen floor
She ends with:
I decided to settle this morning for a re- sponsive eatership      I do not want to wait a week      a year      a generation for the right consumer to come along

Susan happened to send this to me on a Tuesday when I had no Time Management Tueday post, because I had spent the day with a young man, freeing other family members who were building a playset in his backyard. The day before, when I could have been writing the post, I had made pumpkin custard to bring to him. Because, as Paley said of her pie, pumpkin custard is a sure thing. Time Management Tuesday, not so much.

Touching, Gail, But What Does It Have To Do With Time Management For Writers?

Here's the thing--cooking for people like Paley and me, who don't cook for a living--falls under the category of "unnecessary creativity," which I first wrote about back in 2013 in relation to an essay by Todd Henry.

Todd writes about what he calls "Unnecessary Creation," which he believes "is essential for anyone who works with his or her mind." He's talking about creative acts--making something, anything, that didn't exist  before--that are unrelated to an individual's work. "...something about engaging in the creative act on our own terms seems to unleash latent passions and insights." In other words, creativity spurs creativity.

That was certainly the case for Grace Paley, whose pie-making inspired a poem. My custard--and reading Paley's poem--inspired a blog post. One of my objectives for this year was to start some eating essays. I'm inching toward that with this piece. Making that custard was time well spent.

Knowing that one type of creativity can lead to another,  I now have a second mantra.  "When all else fails, create something."