Another Sunday, Another Author Presentation 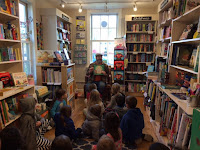 Yesterday I headed on out to the River Bend Bookshop in Glastonbury, Connecticut again, this time to see Josh Funk, who writes the  Lady Pancake and Sir French Toast picture books, among other things. Josh is well known in the New England children's lit world, and, if yesterday was any indication, probably in child and parent world all over. He created a little bit of a mob scene. I wasn't the only person who had to park behind another building. I bought my books as soon as I got there, which was a good thing, because after my sale I heard the staff say they were nearly sold out of the title I purchased.

If you're going to see Josh Funk, get to the venue early. 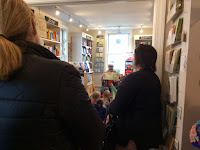 Josh knows how to handle a room of preschoolers, which probably comes as a result of having spoken at over 400 schools and libraries during the last four years. I had a four-year period long ago when I drove the carpool to preschool once a week, which does not give you the same kind of experience managing kids. I belted my kids in. Josh couldn't with this crowd.

He didn't have to. They loved him and loved the books he read them. I should have taken notes on what he was doing, but as you can see, the adults could barely get into the room. And, of course, I was clutching the books I'd just bought. 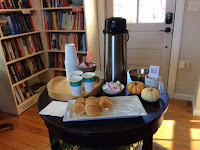 This event was planned as a pajama party, and pancakes, juice, and coffee were served. When I read about that, I thought, Well, that seems to be asking for trouble. But the buffet was set out by the front door and looked as if it involved mini-pakes and no syrup. So, well done, booksellers.