I had a get-together last weekend with a couple of littlies and, as we tend to do when we have a get-together, we did some reading. 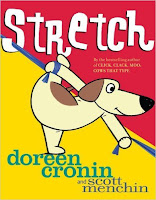 Stretch by Doreen Cronin and Scott Menchin is a good book for listeners who like to be involved in a story, since they can do some acting out. 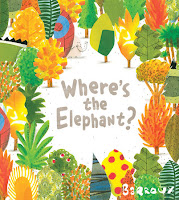 Where's the Elephant ? by Barroux is another involvement book. In fact, it's all involvement and no text. "Listeners" look for an elephant, parrot, and snake in two-page spreads, each one including a jungle that becomes smaller and smaller as human development around it becomes greater and
greater. I  brought this book for a two-year-old, but it was a bigger hit with her seven-year-old brother who has always liked picture searches. He did notice the shrinking greenery, but we didn't get an opportunity to discuss it's significance. Maybe noticing it once is a beginning to an understanding of that situation. 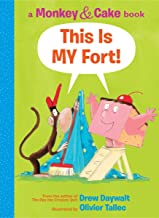 We didn't get a chance to all read This is My Fort by Drew Daywalt with illustrations by Olivier Tallec. I liked it, though. It's a clever spin on exclusionary kid clubs.

Then it was naptime, and someone directed me to the rocking chair in her room with the three books next to it. One of them was a Good Night Moon board book. You know the score on this one. Margaret Wise Brown and Clement Hurd. We read it twice. I may have mentioned here before that I've never really understood this book or its significance. I'm aware that Brown was part of some educational program that was expressed in her writing, but I don't know what it was. 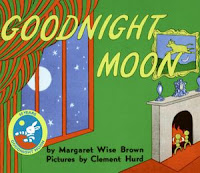 I have to say, though, that after having read this book aloud for so many years, I enjoy the sound of it. I fall into a tone, a rhythm. A whisper. A hush.

I read an essay or short story a day, and somewhere I read an essay that mentioned the old lady whispering hush. It wasn't very much. I wonder about her.

Goodnight Moon is the book I'm sure I'll remember of the four we read on Sunday. That moment, reading it with that little girl. Whispering, "Hush."