Some Of That Personal Rehab I Was Talking About 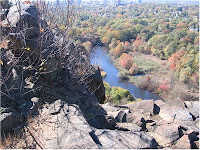 The scenic view photo was taken from a trail in some park in New Haven. I don't even know where. I don't care where it was, just that I was there.

Then we went to a vineyard for a potluck meal and vineyard juice!

When I got home, I actually worked for a while. It was like being a regular person for a few hours.
Posted by Gail Gauthier at 7:53 PM No comments:
Email ThisBlogThis!Share to TwitterShare to FacebookShare to Pinterest

Tomorrow is the awards ceremony for the Connecticut Book Awards.

The finalists for children's illustrator are Bill Thomson for Chalk, Andrea Wisnewski for The Ink Garden of Brother Theophane, and Wendell Minor for The Last Train.

The finalists for children's author are Karen Romano Young for Doodlebug, A Novel in Doodles, Thea Guidone for Drum City, and Lauren Baratz-Logsted for The Education of Bet.
Posted by Gail Gauthier at 7:25 AM No comments:
Email ThisBlogThis!Share to TwitterShare to FacebookShare to Pinterest
Labels: Book awards

I lost ten pounds over the first six weeks of family crisis. I was low on appetite. I come from generations of overweight people, and I definitely was one to eat when I wasn't hungry, because just knowing food was there was a cue to consume it. I would nibble while I was baking or while I was making dinner. I didn't have time to do much baking these last two months, realized that if I just ate a piece of bread for the sake of eating it while I was trying to make a meal, I would have even less ability to eat when it came time to sit down at the table. I can also recall thinking about getting up from the couch in the evening to get something to eat and then realizing, It's just not worth it. I just don't care.

A similar thing happened regarding the Internet. Since the end of August I often didn't spend time on the computer in the evening. After frequently e-mailing family for the better part of an hour after getting home, I wanted to walk in place in front of the television or maybe do a little yoga. When I did take a look at the news websites I follow, I found that the really low-level stuff that usually tempted me--Celebrities Without Make-up! Simon Cowell Made A Mistake!--made me feel the same way food did. It just didn't seem worth the effort to follow the links.

I'm hoping to continue to stay away from food and Internet schlock under what is becoming our new world order.

Another thing I'm going to cut back on is my blog reading. I've been tinkering with that for a year or two, anyway, because it was so time consuming and even pre-latest-crisis I was always strapped for writing time. But for the last six or seven weeks, I didn't go to blogs at all. I don't know that it's made a whole lot of difference to me and certainly not to anyone else. I definitely believe that I should be keeping up on what's going on in my field, but I don't know that I need to be following 30 or 40 blogs, as I sometimes have in the past, to do that. A number of my blogger friends from years past are on Facebook now. If they've done a blog post they think is particularly notable, they'll say so there and I can check it out. The marketing blogs I've tried to follow? Reading them takes time from writing, and if I'm not writing, what will I have to market?

So while I'm in rehab, I'm weeding my Blog Reader. I figure that now is a good time to do it, because if I wasn't going to these blogs for nearly two months, I probably just don't need to go at all.
Posted by Gail Gauthier at 6:43 PM No comments:
Email ThisBlogThis!Share to TwitterShare to FacebookShare to Pinterest

I'm Thinking About Doing Some Rehab

Our family's most recent eldercare nightmare may be making its way down to sustained, mid-level misery that we can get used to living with. So I'm thinking that maybe I can start recovering.

I just began home taekwondo training a couple of days ago, and I'm hoping I can get back to class in a couple of weeks. I haven't been since mid-September. I don't have nursing home duty next Friday, and right now the plan is for me to go hiking with a group I haven't been out with since February, 2010. They're hitting a vineyard after their six-mile trek.

Though I'm interested in submitting an essay in November and need to work on it a bit first, I'm not thinking about really getting back to a regular work schedule yet. I still have elder work to do that will cut into creating a professional schedule for a while. However, I've already weeded out e-mails in the two professional listservs I followed prior to September, and I'm thinking that maybe soon I can start some professional reading. In fact, I've already read a few essays.

Perhaps what I'm thinking about is doing a stint of rehabilitation, like people do after knee surgery or hospitalizations for accidents. After I've done the personal rehab, I can do some professional rehab.
Posted by Gail Gauthier at 6:34 PM No comments:
Email ThisBlogThis!Share to TwitterShare to FacebookShare to Pinterest
Newer Posts Older Posts Home
Subscribe to: Posts (Atom)
© Copyright by Gail Gauthier
All Rights Reserved