Like many young people, I read Sherlock Holmes as a teenager. I struggled to learn the difference between inductive and deductive reasoning. (Yeah. I never worked that out.)  I wanted to be Holmes.

But I recently read two Sherlock-related stories, one after the other, that suggested something new to me. Sherlock Holmes was an early superhero. His superpower? His intelligence.

A Study in Charlotte

In the YA Sherlock update A Study in Charlotte by Brittany Cavallaro Holmes, Watson, and Moriarty were all real people, not characters in books, and their descendants walk among us. (Hmm. That's sort of like The DaVinci Code.) The present Holmes and Watson representatives are teenagers Charlotte Holmes and Jamie Watson. Their families no longer have contact with one another, so what a coincidence that they should land at the same private boarding school in Connecticut. Jamie's kind of a regular guy. He is, after all, just the descendant of a writer. Charlotte, however, is something else. Holmeses have been Holmeses for generations. She is a chippy off the ol' Sherlock block, brilliant, intense, a bit haughty, and fond of drugs. She's been known to help out at Scotland Yard. So, of course when someone starts framing her and Watson for murder, she doesn't just sit back and let the local police take care of things. No one can handle the case as well as she can. Because, you know, she's got that super intelligence superhero thing going on. And now with Jaimie, she's got a sidekick, too.

This book's neat stuff:
A Study in Charlotte trailer: Though this is twice as long as I thought book trailers are supposed to be, if you've read the book, it's like watching a mini-movie adaptation! I hope this is Emma Pfaeffle's audition for the real movie adaptation. 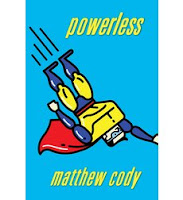 In the middle grade Powerless by Matthew Cody, Holmes and Watson were characters in books. In this book, main character Michael just admires Holmes and studies him. It's a good thing he does, because he moves into a new town, a new town with kids who have secret superpowers. Real ones like flying and super strength. While Michael seems powerless in comparison, being merely smart and heavy on acquired Holmes knowledge, when these superkids are having their superpowers stolen from them, they don't need another guy with superpowers to lose.

This book's neat stuff:
Well, you know what side I come down on in that discussion. Obviously, he is a Holmesian superhero.


My theory now is that child and YA readers are not attracted to the man Sherlock Holmes, who only only comes out of his apartment to work and who only has one friend. What they're interested in is what I was interested in as a child reader of Sherlock Holmes--his ability to right wrongs and serve justice simply with his mind. His super intelligence didn't come to him because he is an alien or was exposed to some kind of chemical that changed him. It's something he just had or developed on his own.

Therefore, Holmes is a hopeful hero for us, because while we learn pretty young that exposure to chemicals and radiation leads to some grim things and not spidie sense and that nothing alien has ever arrived on our planet that looked like Superman, intelligence is another thing. Maybe we have super intelligence like Sherlock Holmes and don't know it, or maybe we can develop it somehow.

There's a chance we can become like Sherlock Holmes. And that's why there continues to be a child audience for Holmes-related stories.

My bedtime stories this week are the a book of Holmes-related short stories called THE IMPROBABLE ADVENTURES. While I didn't read Holmes growing up Tech Boy did, and it really is true: it's the BRAIN that inspired the devotion, the closest to real super-heroing to which the average kid could aspire. I can definitely see teen and tweens wanting to put the emo behind them and just be cerebral - I would have DIED for that strength.

Good grief, that TRAILER. WOW.
*puts this on the list of newish Holmesian books she's going to read*

The trailer--Talk about incredible production values, huh? I may never make another trailer after watching that.

Whenever I hear people talking about what superpower they would choose, if they could choose, they always say flying or invisibility. And I always think, What? Those are party tricks. If you could choose, why wouldn't you choose super intelligence so you can actually DO something? So you can tell the invisible and flying people what to do.