I've been doing a lot of writing about conferences recently and all the different types of information that can be acquired there. But writers' publications can be good sources of info, too. Not so great on building the old social portfolio, but magazines are cheap, you can read them at your convenience, you can read them anywhere, you can read them in your nightclothes. They have a lot to offer.

So let's consider a couple.

I've been subscribing to Poets & Writers for a few years now.  It's on the literary side. It's heavy on advertising for MFA programs. The back of the mag has a big section on grants & awards & residencies. I think an argument could be made that it is marketed to those writers who have recently been described as privileged. Those writers who can come up with the money for MFAs, conferences, and residencies, and can afford the time away from a day job to attend them.

I will be honest and say that I lean toward privilege these days, myself, being a writer with a supporting spouse. Perhaps that's why I like reading about conferences and retreats, though I don't attend many. For instance, the issue you see here had an article on a conference "that is aimed at inspiring writers and triggering new work rather than shopping around the old." That sounds good. Also, P&W does a regular series on self-pubbed writers who have often spent a bundle and have their experience commented on by a marketer and an editor. Those are great. The interview with Jhumpa Lahiri writing a book in Italian? Right up my alley. The only thing that would have made it better would have been if she'd written that book in French. Unless she wrote it on a French 2 or 3 reading level, I still wouldn't have been able to read the original edition, but hearing about her experience have warmed my privileged soul. 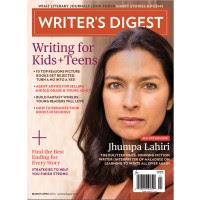 I've just started receiving Writer's Digest because the subscription was only $10. That's how I've ended up with a number of magazine subscriptions over the years. Writer's Digest is more nuts-and-bolts than privilege. It's into how-to articles like 10 Picture Book Pitfalls--and How to Fix Them by Marie Lamba.

I like reading about problems and solutions. I feel a great connection when I hear from writers who have struggled with the same things I've struggled with and can come up with a way to deal with them that doesn't involve me taking a couple of years off from my life to go to graduate school. (I'm privileged but also a little lazy.)  I liked having Erika Dreifus (who I kind of know in a vague, "we've communicated" sort of way) state in her WD article, Habits of Highly Successful Short Story Writers, that writers for literary journals should "submit widely and often." That's something I need to hear right now.


I'm sure you can't help but notice that Jhumpa Lahiri was on the cover of the March/April issues of both Poets & Writers and Writer's Digest. The P&W article was a conversation with the translator of Lahiri's book, In Other Words, and was all about Lahiri's experience writing that book in Italian, a language she has only recently learned. As interesting as that is, it probably won't click with many American, English-speaking writers, of whom P&W readers are just a subset. The WD Lahiri article was an interview conducted by a WD assistant editor, and it covers Lahiri's writing and teaching as well as her book in Italian. Many more writers will relate to that.


I think that pretty much illustrates the difference between the two publications. If you're into magazines (and I so am) choose one or, like me, read both.
Posted by Gail Gauthier at 1:57 PM
Email ThisBlogThis!Share to TwitterShare to FacebookShare to Pinterest
Labels: The Weekend Writer