After three days on an antibiotic that doesn't make me sick (so far), I am again sitting up and taking nourishment. In fact, I started working again yesterday and have done a little cooking.

I've also watched a lot of TV. Last weekend when the body aches hit, I added a Netflix app to my tablet so I could watch TV in bed, twenty-four hours a day. And that's what I did for several days at the beginning of the week. I watched two Katherine Ryan specials, the new Aziz Ansari special, all three seasons of Broadchurch, part of season one of Miss Fisher's Murder Mysteries, and an episode from the last season of Episodes. 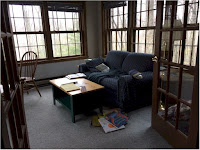 I would wake up and watch some TV on my tablet before I got out of bed. Once I was better, I moved out to the sun room to watch tablet TV. I'd go to bed and watch an episode of Broadchurch before I went to sleep. Except one night when I was running late, I watched that episode of Episodes because it was only half an hour. If I woke up in the night, I watched TV.

Those were all times when I used to read. I had no interest in it then. Kind of like I didn't have an interest in eating Saturday night into Tuesday.

Then one morning instead of watching TV in bed, I used my tablet to read articles. A number of them. Last night I ended up reading the first story in a Shirley Jackson book I've had on my Kindle for at least a year. Even though twice today I petered out and stretched out on the sun room couch to finish Broadchurch, it looks as if I'm back reading.

Posted by Gail Gauthier at 10:08 PM
Email ThisBlogThis!Share to TwitterShare to FacebookShare to Pinterest
Labels: reading

I'm glad you are improving. Being too sick to read is the WORST! Hoping for a speedy full recovery (especially to the point of feeling like yourself), and some good reading in the meantime.