Now This Is What A Historical Novel Should Be 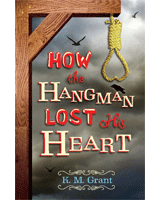 When I was a young 'un back during the last ice age, we didn't read cliche-ridden, didactic historical novels designed to forcefeed us facts about significant events or teach us meaningful lessons about man's inhumanity to man. No, indeedy, my little lads. We read historical fiction for the thrills! Ah, how many dateless Friday nights we spent as teenagers reading about spunky, if not outright outcast, girls racing across war-torn Europe during the Napoleonic Wars. Or girls fending for themselves during almost any period of English history. Or generation after generation of young people dealing with the disasters of one historical period after another in family novels that covered a century or more of time.

If we were able to bowl over our eighth grade social studies teachers with our knowledge of British monarchs, that was just the icing on the cake. But getting educated wasn't the point. We were feral readers! We weren't reading off any official book list! Book lists hadn't been invented!

By the time I got to page two of How the Hangman Lost His Heart by K.M. Grant, I knew that at last I had found the kind of historical novel that had led me to take all those college history courses. Hangman is a very wry and wonderful twist on those books I devoted so much of my adolescence to reading.

For instance, it has a traditional heroic leading man in Colonel Francis Towneley. He's a handsome, aristocratic soldier who has supported Bonnie Prince Charlie in his attempt to take the English thrown from George II. (This is the George II who you may have been reading about this weekend in accounts of British royalty in the military because George II was the last British monarch to lead troops in battle.) Colonel Towneley is everything a historical romance leading man should be. Unfortunately, he is hanged, drawn, and quartered in the first chapter. His niece Alice possesses loads of spunk, and she meets the very hangman who did Uncle Frank in when she collects his body. She can't get his head, though, because it has been cut from his body and needs to be exposed on a pike for a while as a lesson to other Catholics who think they'd rather not have a Protestant king.

But that night Alice decides she just can't leave good Uncle Frank's head bodyless and exposed to the elements, and she sets off to save him. Er, it. She runs into trouble and throws in her lot with the hangman, who may be missing some teeth, is definitely married and illiterate, and doesn't know how to ride a horse. They are being pursued by (among others) a handsome young soldier who is poor, afraid of heights, and brow-beaten by his major.

This is a wonderfully balanced book. It is not a historical novel that has only a setting. It does have a detailed setting in time and place. But it also has a great story. It has wonderful, developed characters. It has a traditional theme of man (and woman) against society. And this third-person narrative has plenty of subtle, dark humor.

If you really, really must have a lesson of some kind with your historical fiction, there's a lovely one here about the difference between unconditional and romantic love.

K.M. Grant totally lucked out because the real Colonel Francis Towneley, the last man hanged, drawn, and quartered in England, was her ancestor. In fact, you can read a very nice account at her blog of her family gathering at the chapel at Towneley Hall on All Soul's Day to pray for the Towneley dead, including Uncle Frank.

How the Hangman Lost His Heart received a starred review from The Horn Book in its January/February issue. Otherwise, I'm not hearing as much about it as I would expect to.
Posted by Gail Gauthier at 7:16 PM
Email ThisBlogThis!Share to TwitterShare to FacebookShare to Pinterest
Labels: historical fiction, Reader response

I have been meaning to blog about this book for several months. I heard Katie Grant recount the tale of her poor Uncle Frank at a conference. She is a gifted storyteller and had several hundred librarians shaking with laughter at her wry delivery.

I come from the border between England and Scotland and grew up with tales of Bonnie Prince Charlie. Unfortunately, Newcastle went for George (we're still know as Geordies). I am going to get this book asap. Thanks for sharing.