Last week we were talking about Christmas purchases of overlooked books published pre-2008. Yesterday I bought three of the books I mentioned and added a fourth. This book wasn't overlooked when it was published in 2006, but, boy, are its handlers making things difficult for it now.

Back when this clever combination historical novel, scifi time traveler story, and English procedural mystery by Linda Buckley-Archer was originally published in hardcover, it was called Gideon the Cutpurse with a marvelous two-piece cover. I'm sure there's a technical term to describe it, but the best I can say is that the top, hard cover had a jagged hole with an eye on the page beneath so that it appeared that someone was looking through a hole in a board. The title and cover were both very striking.

Unfortunately, the character Gideon the Cutpurse wasn't the protagonist. He was also an adult. He was also a nice guy, but not particularly charismatic, which is what you want in an adult character in a children's book if you're going to name the thing for him. And while I loved the cover, I can't recall any scene in the book that it illustrated. It may not have had anything to do with anything.

So I can see why the publishing powers behind this first in a trilogy thought it might be a good idea to make some changes with the paperback. 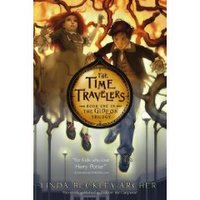 However, they changed the name to the generic and forgettable The Time Travelers: Book One In The Gideon Trilogy. And the cover...seriously underwhelming. Okay, now we know there are kids in the book, which we didn't before. Still, it just looks like another time traveling story for kids, while before it looked like something special, though probably no one knew what.

This paperback also carries a blurb: "For kids who love Harry Potter." What? I guess if you take the attitude that Harry Potter is fantasy and if you think that The Gideon Trilogy is fantasy instead of science fiction and if you believe that all fantasy is alike, then maybe...No. No. It just doesn't work. And it does such a disservice to this novel. Harry Potter fans are going to feel misled and people who've had all they can take of Harry are going to avoid The Time Travelers unnecessarily.

Now, note that they're calling this series The Gideon Trilogy. I'm guessing that's to maintain some kind of connection to the original title of the original book. However, Gideon isn't even mentioned in the publisher's description of the second book, The Time Thief. (Which, by the way, has just come out in paper.) Does he have a big enough part in the books to warrant having the series named for him? (I plan to keep reading them, so I'll let you know. Get back to ya on that.) 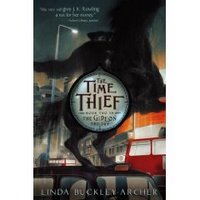 The first book definitely was good. The second has been nominated for a Carnegie Medal. It would be a shame if this series gets lost in the confusion of name and cover changes and over-the-top blurbs.
Posted by Gail Gauthier at 6:49 PM
Email ThisBlogThis!Share to TwitterShare to FacebookShare to Pinterest
Labels: historical fiction, Marketing, science fiction

I'm just catching up on old posts, and I'm so with you on this. I've read both of the first two books, and they're both great. The second one is even better than the first one.

But - WTH - why on Earth would they give the books such generic and uninteresting titles and covers? "The Time Travelers?" That could be any time travel book ever written, and doesn't give any idea of what makes these books distinctive. Personally, I liked "Gideon the Cutpurse" as a title, even if Gideon wasn't the protagonist. It's just interesting enough to make you want to find out more.

It's a shame that the publisher is making it so difficult for these excellent books to find their audience.