Catching Up With Picture Book Biographies

Yesterday was the first Tuesday in over a month when I didn't have family duties. Since in the preceding forty-eight hours I'd decided to get started on three new projects, while continuing with two I was already working on, I was most excited about having a few extra hours for work. So what did I do? I locked myself out of my house. After depositing some perishable groceries with a family member twenty minutes away, I hunkered down at the library for an hour, hoping I could do something there. 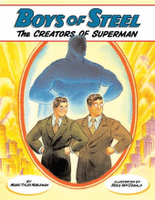 What I did was read four picture books. Two of them just happened to be picture book biographies, one of which I found far more successful than the other.

Boys of Steel by Marc Tyler Nobleman with illustrations by Ross MacDonald tells the story of how Jerry Siegel and Joe Shuster created Superman during the Depression. It ends with Superman becoming successful. Information at the end of the book tells how Siegel and Shuster lost the rights to Superman and struggled to make a living, but the actual picture book story is one of teen misfits who create something different ("The other heroes Jerry and Joe read about were regular humans in strange places. This hero would be a stranger in a regular place.") and lasting. Siegel and Shuster actually do something. 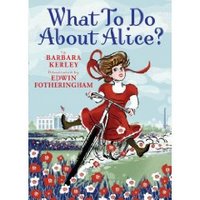 That doesn't seem to be the case in What To Do About Alice?, a picture book biography of Alice Roosevelt Longworth by Barbara Kerley (who also wrote The Dinosaurs of Waterhouse Hawkins), with illustrations by Edwin Fotheringham. The book covers Longworth's youth, when she was still just Alice Roosevelt (Teddy's oldest girl), and she comes off sounding like the Paris Hilton of her day. There is an over-the-top character here, but not a lot of story because from everything I've ever heard about Roosevelt Longworth, she didn't actually do anything, the way Siegel and Shuster did. In What To Do About Alice? she's much more of a celebrity, someone who's famous for being famous.

A celebrity tale just doesn't have the natural narrative arc you find in stories about real achievers.

What To Do About Alice? was named a Siebert Honor Book this year.
Posted by Gail Gauthier at 7:53 PM
Email ThisBlogThis!Share to TwitterShare to FacebookShare to Pinterest
Labels: Picture books, Reader response