Since We Were Talking About Nonfiction A Couple Of Days Ago... 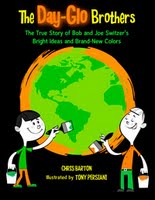 ...this might be a good time to mention The Day-Glo Brothers by Chris Barton with illustrations by Tony Persiani.

Disclaimer: First I want to mention that I kind of know Chris Barton in that bizarre way you know people on the Internet you've never met in the flesh and have never been anywhere near because you live in different parts of the country. Which is to say that we've left comments on each other's blogs, which is like knowing someone, but barely.

The Day-Glo Brothers is a picture book describing how Bob and Joe Switzer created Day-Glo paint. This is a really impressive book for three reasons:

1. It truly is written for the age group to whom it is marketed. I've seen a number of beautiful nonfiction picture books that included way too much text for grade schoolers and text that was way too sophisticated for grade schoolers. Usually both at the same time. They were very fine books, but they were really for adults.

2. The "story line" makes sense. Barton does a good job of finding something about each brother that explains why he did what he did. Even traditional, adult biographies sometimes fail to do that for their subjects.

3. The art work is simple and easy to take in. It's not of a "fine art" type. Hey, I like fine art as much as the next person. But it's sometimes too complex to help carry a story, as art needs to do in a picture book. The art work in The Day-Glo Brothers is also reminiscent of 'fifties and 'sixties film strips and brochures. It fits the period during which the Switzer brothers lived and worked.

I've been talking about this book for days.
Posted by Gail Gauthier at 6:43 PM
Email ThisBlogThis!Share to TwitterShare to FacebookShare to Pinterest
Labels: Picture books, Reader response