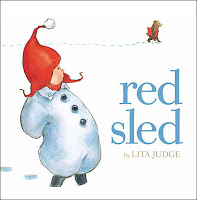 I am often...disappointed...in myself because I can't juggle more balls or even juggle the ones I do juggle very well. I do try to know myself, accept my limitations, and move on, but when I hear of others who are coping with far bigger problems than I am and doing so with good grace, at the very least, I do feel chagrined.

Lita Judge, who I heard speak about year and a half ago, has a new book, Red Sled, coming out this month. However, she's been sick for at least nine months and won't be able to do much to promote it.

At least I'm dealing with other people's health problems and not my own. Man up, Gail!

It's hard to describe how difficult it is for writers, or probably for all people who create/produce anything, to go through all the effort to get from idea to end result and then find that's it because they can't do the next step of getting attention for what they've done. And to have that happen because of something so outside your control, like an illness, which you have to cope with on top of your professional struggles, compounds the frustration.
Posted by Gail Gauthier at 8:32 AM
Email ThisBlogThis!Share to TwitterShare to FacebookShare to Pinterest
Labels: Picture books