Conventional Wisdom tells us that writers tend to be introverts, drained by lots of interaction with large numbers of people, at their best with small groups or even working by themselves. Presumably that's one of the reasons we're attracted to writing in the first place.

And, yet, in the 21st Century, so much of nonwriting writer work is done in large groups--conferences, book fairs, speaking engagements, etc. I've written here before about introverts attending professional gatherings. The structured workshops, panel discussions, critiques, and even one-on-ones aren't a problem. Those are the reasons introverts go to these things. The meandering around before and after events is another thing. Lunch. Coffee breaks. Grin and bear it time, folks. You sometimes hear about how these excruciating moments are the most important part of a professional gathering. So important, that they have their own name...networking.

Networking is like going to singles bars, but for professionals. In publishing, it's when people hope to meet the agents and editors who will change their professional lives. Maybe even in an elevator, which is where the expression "elevator pitch" comes from. Personally, I don't believe that story that was going around years ago about a woman shoving her manuscript under a toilet stall to an agent at a conference. Urban legend, in my humble opinion. But it makes a point about expectations for networking.

I will be honest and admit that I don't even try to network anymore. Though I've been to enough writing events over the years that I usually see people I'm at least acquainted with when I attend them, I can't say that I've made any career changing connections at any program I've ever attended. I've taken in some great content from presenters, but meeting someone who boosted me up the publishing ladder? No. When I see on meeting instructions that there will be a half-hour of networking before the program that is my real goal for the day, I figure I can sleep in thirty minutes and get there late. 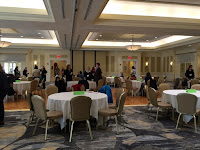 Which brings us back to last week's Third Annual  New England SCBWI Agent/Editor Day. This Agent/Editor day was organized so that participants would meet in small groups with with an agent or editor in the morning and then with another agent or editor in the afternoon. What you're essentially doing is creating a writers' group, then creating another one a few hours later.

The materials we received asked us to be sure to arrive by 8:45, though the first group didn't begin until 9:30. I looked at it and thought, Yeah, sure.

Of course, it wasn't a test. Nonetheless, I ended up leaving the house under a full moon that morning to get to New Hampshire for 8:45. I pulled into the parking lot after 8:30, knowing nothing would be happening for 45 minutes. I wasn't miserable, by any means, but I definitely wasn't enthusiastic.

Then I get inside and see tables set up in a ballroom...with a dance floor, not that that matters. And each table has the name of the agent or editor assigned to it. And everybody just went immediately to their assigned tables, because evidently introverts follow instructions really well. What followed was forty-five minutes of pretty meaningless chit-chat, but, hey, painless!

After two hours of very good literary criticism, it's time for lunch. Remember how much fun the high school was the first day of a new school year? Yeah, that's what lunch is like at conferences. But last week, instead of drifting off to some other spot and forcing ourselves on other people, we picked up our food from the buffet and came back to our table. Our very same spots next to people we'd been with for hours. Well, just under three hours. But that's hours. It was as if we knew each other, in that way you can know people whose name you can't remember, even though everyone's wearing name tags.

Then we got up and all separated and headed to other tables for our second session of the day where there was another sign, and we were good to go for another couple of hours. During that second session, by the way, someone brought around plates of cookies, which was kind of hygge-like. (Yes, I am reading The Little Book of Hygge.) Hygge--comfort, contentment, coziness. Not that I ate any of the things, but the hygge was still there.

Number of people participants had to interact with: Seven or 8 at a time, 14 or 16 altogether

One hundred to 114 people, not that manageable. Seven or 8 people? Totally manageable. Seriously, I barely knew anyone was there besides my two groups. This thing was an introvert's dream.

Now, I can't say at this point that I made any career-changing connections at this thing, though I may very well change the way I write as a result of my time there. But for me this set-up will remain the gold standard for a professional gathering for quite some time to come.