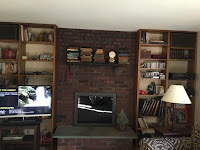 Okay, so we've talked here about the old books I was decorating my mantel with. I finally found a picture of the thing all prettied up with stained and torn books that were probably causing mold- and health-related problems here. Marie Kondo would have had a stroke if she'd seen this place.

Today we're covering my copies of The Radio Boys Search for the Inca's Treasure (1922) and The Radio Boys Rescue the Lost Alaska Expedition (1922) by Gerald Breckenridge. According to Wikipedia, the source of all knowledge, there were three Radio Boys series published in the 1920s. The biggest sellers were published under a pseudonym by the famous Stratemeyer Syndicate. My books, of course, are not among the biggest sellers. 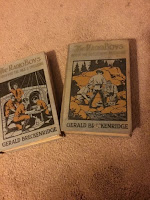 The Internet isn't swarming with info about him, though I did find that his papers are archived at the Auburn University at Montgomery Library. According to the guide to the papers "The collection lacks significant information pertaining to Breckenridge's career as a newspaper man, his relations with Lella Warren, or his other writing activities." Which kind of makes you wonder why the material is there. Lella Warren, by the way, was Breckenridge's first wife and a writer. In the very next paragraph, the guide writer says, "Among the more interesting items within the collection are the book and short story drafts. Portions of the drafts appear to have been written in the fictional/biography style utilized by Lella Warren. There is insufficient information available to determine the influence of these two writes upon one another."

If I were one of those tabloid writers who cover the royal family, I'd have a field day with those last two sentences. But I'm not, so speculate quietly to yourselves.

Gerald Breckenridge is another author who has traveled into the land of obscurity.

I also found two other books from children's series on the mantel:  Buddy on the Farm by Howard R. Garis and Bound to be an Electrician by Edward Stratemeyer. Yes, that Stratemeyer, the one of Stratemeyer Syndicate fame. Evidently he wrote a boatload of books himself in addition to...producing or packaging...series written by others. It appears to me that much of Stratemeyer's own work has become obscure, while some of the syndication's series, such as Nancy Drew and The Hardy Boys, remained known until very recently and may still be. Nancy Drew, in particular, has some cultural significance.

My copy of Bound to be an Electrician is inscribed to my husband's great-uncle, a Christmas present from his aunt in 1910. Someone held on to it for over a hundred years and moved it from place to place. My mind is boggling over that.

Marie Kondo, come get these books.