I am certain I've written here about attending used book sales, but every search I can think of turns up nothing. At any rate, I've been to another.

I became interested in library used book sales a few years back while my mother was a resident in a skilled nursing facility. I would go to these sales to keep her in Nora Roberts' books. Also Danielle Steele...Fern Michaels...Maeve Binchey...She was a fan of a whole slew of woman writers. I kept lists of the titles she'd read for each author on my cell phone so that when I hit these sales, I didn't buy duplicates. I'd bring my finds in when I visited her, and we'd go through them. I'd leave some, keep the rest of the stash in bags and boxes in my laundry room until she needed more.

What I found happening while I was at these sales was that I'd also buy for myself, because books would jump off the tables at me. (I know I did a post on my finds at a book sale I went to this past year. Where could it be?) In particular, I liked a certain kind of edgy, sightly off center adult fiction. The Elegance of the Hedgehog by Muriel Barbery, for example. The True Story of Hansel and Gretel by Louise Murphy for another.

I've been hearing for years about a library used book sale in a town on the "other side of the river," as we say here in central Connecticut. It's so large, they can't hold it in the library; they have to move everything to the local high school gym. The sale last two days, and legend says that on Saturday morning you have to stand in line outdoors to get in. It's held in September, a time when we're usually traveling. We're home this month, though, so I decided to take this opportunity to go to the sale yesterday.

I'm Getting Kind Of Picky


This sale is in a town an hour away from me, which is a way to go for used books. I have family members who live there, though, so it doesn't seem that far to me. I'd been in town just two days before.

Still, I'd been on the road for about a half an hour yesterday, when I suddenly thought, what if I'm disappointed? I'd been looking forward to this trip for weeks. What if the sale wasn't that great? 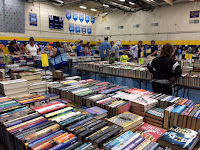 I have to say, even though the number of books offered was as huge as I'd heard, I was sort of underwhelmed. I arrived around two in the afternoon, because I'd been warned on Facebook that Saturday morning is a mob scene, so I didn't have to wait in line. But when I arrived, what I was first confronted with were several tables of stacks of new bestsellers. Piles of the same titles. I've seen new books like these at other library book sales and was told by a source at one of them that someone involved with that library had a connection with a chain bookstore, and the books came from there. Someone at yesterday's book sale must have had a great connection with a chain store or a warehouse or something. These books were being offered for either two or five dollars. Nice prices.

To me, though, it was like I was hitting a Barnes & Noble instead of a used book sale. I'm not one of those people who has an issue with B&N. B&N placed a decent sized prepublication order for one of my books. Also, I have plans for the B&N gift card burning a hole in my pocket. But, still, if I'd wanted to go to B&N yesterday, I would have gone to B&N.

While going through the paperbacks further back in the room, I noticed a lot of books that you'd kind of expect to find. Also, books that I'd read. And, remember how I said I used to go to these things specifically for Nora Roberts? I didn't need to look for Nora Roberts yesterday, but old habits die hard. I only found a couple of boxes of them. I've been to smaller sales at libraries in smaller towns and found whole tables of Nora and her kindred authors. What was that about?

My husband pointed out later that I couldn't have looked at every book in this room. That's true. But as I said to him and said earlier in this post, the point of going to these sales is to buy books that jump off the tables at me. So I don't have to look at everything. 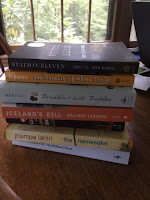 So What Did Jump Off The Table At You, Gail?


Station Eleven by Emily St. John Mandel, because it deals with a situation I've been thinking about writing about. Reading this might make me think twice about that.

The Pursuit of Alice Thrift by Elinor Lipman, because I read another book by the author, which I liked.

Breakfast with Buddha by Roland Merullo, because I'm interested in reading about Buddhism, but only if it's easy.

Iceland's Bell by Halldor Laxness, because I just finished watching two seasons of an Icelandic television show. In Icelandic with subtitles. I'm committed.

A Closed and Common Orbit by Becky Chambers, because while it's science fiction I've never heard of, it's supposed to be "exciting and adventurous."

The Namesake by Jhumpa Lahiri, because I read an article about Lahiri writing a book in Italian, a third language for her. Damn. It wasn't this book, but still, I showed some respect and bought another one of her books.

My Brilliant Friend by Elena Ferrante, because it's famous. Seriously, I think this book is about two people. That's it. What I've heard is that it's the first in a famous series by a famous Italian author. Hey, it jumped off the table at me.

What Did This Set You Back, Gail? 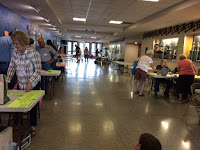 Okay, so I read the sign on the wall about the pricing of the book. I read it a couple of times. I thought I was going to pay at least a buck seventy-five for each of these books, maybe more. I was charged seventy-five cents a piece for a total of five-dollars and twenty-five cents for seven books. I hope those nice cashiers didn't undercharge me. I feel as if I know them, because it turns out they've seen the same Icelandic TV show I saw.

If you look at the picture above and to your left, you'll see that this place had five cashier stations set up. They had tables for, I think, three more. For when things got really busy.

I ended up spending a lovely hour there, underwhelmed or not, enjoyed some Cheerios and chocolate chips in the car afterwards, and didn't hit any traffic in Hartford going either way. A good Saturday afternoon.
Posted by Gail Gauthier at 7:30 PM
Email ThisBlogThis!Share to TwitterShare to FacebookShare to Pinterest
Labels: library book sales