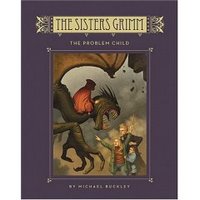 The Problem Child by Michael Buckley begins awkwardly and barely ends at all because it's the third book in The Sisters Grimm series, which, if this book is any indication, is much more of a serial.

But as serials go, this one isn't too bad. And I say that in spite of the fact that the whole twist on fairy tale thing, which appears to be a fantasy sub-genre, is not a favorite for me.

Buckley's big strength appears to be his witty way with twisting fairy tale characters. Two of the Three Little Pigs have formed a construction company and argue over the benefits of using brick vs straw as construction material. The Little Mermaid used food to deal with rejection by her human love and now has a substantial weight problem. A witch (who I should probably recognize from some fairy tale tradition but don't) is seriously into Days of Our Lives.

And like many fantasy books for young readers, this one involves characters who learn that they aren't who they think they are. After their parents disappear, The Grimm Sisters learn they are descendants of the Brothers Grimm, and their function in life is to serve as fairy tale detectives in a Hudson Valley town where fairy tale characters are forced to live. Just as young women are attracted to Georgette Heyer romances because seemingly powerless female characters win the romantic heroes, young people are probably attracted to books like The Grimm Sisters because powerless child characters find that, really, they are exciting people, perhaps even powerful ones.

Not too powerful, though. That's the message of this book. I'm reading along, seeing how things are going to go, and I'm thinking, No! No! Power is good! Gimme some power!

Clearly, there would be no hope for me in The Grimm Sisters' world.

By the way, The Grimm Sisters books include a marvelous, Peter Pan-type character named Puck, a Trickster King who wants to be a bad boy but who keeps showing up to pull the Grimms' fat out of the fire.

If you like Puck, you should keep reading. He's developed more as the series (sorry, serial!) goes along. Also, "power" is a theme that is developed more in the later books.

I found the later books to be better than the first one, which I thought primarily set up the series. However, it does continue to fit your definition of a serial, which will probably drive you crazy.