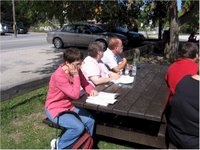 Several times over the years I've had these bizarre experiences in which my reading intersected with my traveling.

For instance, not long before I took off for Ottawa last weekend, I finished reading A Private Hotel for Gentle Ladies by Ellen Cooney, which I heartily recommend if you are a long-married lady, gentle or otherwise. In this book, a character mentions the Rideau River. Wouldn't you know it, last Monday I went biking on the Rideau Canal.

Then, I finished reading Beige by Cecil Castellucci before I even got out of the country. The main character lives in Montreal and twice mentioned poutine. Yup, I ate poutine three times last week. My goal was to eat it once each day, so I failed miserably.

I didn't knock off as many books this vacation as I have on others. For one reason, I was reading Mr. Emerson's Wife by Amy Belding Brown. Though I do love them Transcendentalists, it's not a book for whipping through in the car. Get this, though--yesterday we were in Saratoga Springs and who did I read was there before me? Say, a hundred fifty or sixty years before me? Mr. Emerson himself.

I also didn't do as much book reading because while I was still in Canada I was spending time reading The National Post's series on Mordecai Richler. I was talking about his children's book series here just last...okay, it was back in March. But I am very fond of Richler. The National Post did the series on him because Canadian TV was running a new production of St. Urbain's Horseman, which I read a hundred years ago.

Okay, then I went to The Canadian Museum of Civilization. It had this new exhibit, Face to Face: The Canadian Personalities Hall, and who do you suppose was there? Yes, Samuel de Champlain, but also, Mordecai Richler!

You know, but in all the reading I did about him last week, I'm still not sure how to pronounce his name.

Anyway, I just love when my reading and traveling come together like that.

Though I've just told you that I didn't do as much reading as usual, above you will see me rudely ignoring everyone around me so I can read while waiting for a train.
Posted by Gail Gauthier at 3:57 PM
Email ThisBlogThis!Share to TwitterShare to FacebookShare to Pinterest
Labels: Modecai Richler, Transcendentalism, Vacation