My Favorite Dangerous Books For Girls 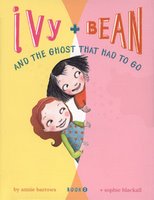 The Ivy + Bean books by Annie Barrows have been well received, but I don't think they get the amount of attention that a couple of other young girl series have been getting. I don't think it's just one of those unpredictable things that happens sometimes. Ivy + Bean doesn't get more buzz than it does because it doesn't play to grown-up readers the way Junie B. and Clementine do.

Bean could be described as a Junie B. and Clementine type of child in that she tends to go her own way. Her creator describes her as "loud and wild." The difference between Bean and the other leads in the big, girl series is that Bean is comfortable with who she is. She isn't always anxiously interacting with adult characters who reassure her in some way or are involved in helping her learn a reassuring lesson. Most of Bean's interaction is with another child and not adults. She interacts with Ivy, her co-lead, who, superficially, is your stereotypical quiet little girl.

Yeah, your quiet little girl who is into magic and potions, and who is sharp as a tack. Talk about still waters running deep.

These kids don't need a lot from the adult world. Adult readers aren't going to be comforted by story lines in which characters like themselves are in control. Ivy and Bean and the Ghost That Had to Go takes place at their elementary school. (The first book in the series didn't.) Yes, the girls have a very nice teacher. But there's also a satisfyingly retro fifth grade teacher patrolling the halls in pantyhose and high heels for the girls to clash with and overcome.

Yeah. That's right. You heard me. The teacher doesn't lead the children to some meaningful revelation about life. The teacher, an avatar for society and the conforming world, loses to two second graders. That's the way it should be because, damn it, this is a kids' book. (Imagine a Lewis Black rant here, complete with frantic head shaking and garbled noises and concerns about whether or not my head is going to explode over the mere thought that kids should fight the good fight and win in a book about them.)

So, anyway, you can see why adult gatekeepers might find the Ivy and Bean series just a little bit dangerous. We'd much rather direct young readers to books that portray wild girls hobbled by problems and needing grown-ups. We don't want wild girls to know that they can take on the world themselves.

This gatekeeper, however, is making sure her niece gets an Ivy and Bean book for Christmas this year.
Posted by Gail Gauthier at 9:18 AM
Email ThisBlogThis!Share to TwitterShare to FacebookShare to Pinterest
Labels: Books for Younger Kids

I LOVE Ivy and Bean. I think they are hilarious. I book talked the first book and am even thinking of using it in the intergenerational book discussion group I do. It's between Ivy & Bean or Clementine :)

Well, you know which way I'd vote.

I have been casting about for a book for my niece. Thank you, thank you for talking about this series.

Just had to let you know I have Ivy & Bean Book 3 to read now I found it on our new books shelf.