Where Have I Been For The Last Ten Years? 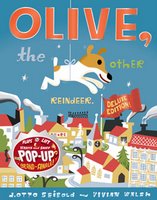 Living in my celler, for the most part. That must explain why Olive, the Other Reindeer by J. Otto Seibold and Vivian Walsh was just the tiniest blip on my radar. According to the press release I received with a copy of the tenth anniversary deluxe edition, the thing has sold more than a million copies. And there was a cartoon, for crying out loud.

Really, I am embarrassed.

Olive has a very ingenious premise. A dog named Olive is wrapping presents and listening to the radio when she hears a song that includes the words, "All of the other reindeer..." She hears them as "Olive the other reindeer." She experiences an identity crisis and comes to believe that she's not a dog at all, but a reindeer. Of course, she heads off to the North Pole, and what follows is essentially Rudolph the Red-Nosed Reindeer with a dog and no laughing and name calling on the part of the real reindeer. (If they couldn't take Rudolph, who was at least of their species, you'd think a dog would never make the team. But here, surprisingly, they are most gracious.)

For those of you for whom charm and cleverness are not enough, it's also, like Rudolph, an outsider story. Check out Scholastic editor Cheryl Klein's page on plots and popularity in which she discusses how Rudolph the Red-Nosed Reindeer is one of two plot structures that outsider stories usually follow. (The other, she claims, is The Ugly Duckling.)

The whole outsider thing gave Olive the Other Reindeer an extra level of meaning that I quite enjoyed. Bring up the concept of "the Other" (as in "the other reindeer"--get it?) when you're reading it with the kiddies and make Christmas extra special this year.
Posted by Gail Gauthier at 6:35 PM
Email ThisBlogThis!Share to TwitterShare to FacebookShare to Pinterest
Labels: Picture books

Megan Germano said...
This comment has been removed by the author.
8:25 PM

Now, I always think it's very... interesting...when a movie or cartoon becomes more well known than the book it was adapted from. All kinds of interesting questions arise, particularly if the adaptation made some significant changes.