You Will Believe You Are At Camp 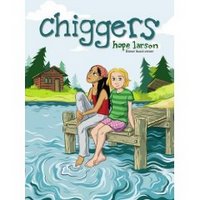 Chiggers by Hope Larson made me feel that I didn't miss anything by not having gone to summer camp. On the other hand, I recognized a lot of what was going on in this charming graphic novel, because summer camp sounds a whole lot like college dorm life, minus the sex and drinking.

Chiggers is about young Abby's experience at summer camp. She was looking forward to more of the good times she'd had in previous years with her friend, Rose. But Rose, an older camper, is now a Cabin Assistant. So Abby is on her own, struggling with making new relationships with new people who often aren't in the same scheduled activities she's in and who sometimes talk about her in the bathroom and who she works things out with, after all, in time for everyone to promise to write when camp's over.

It could be argued that there's no real story here, with a traditonal plot and a climax. It's one of those Zenny books that you just have to enjoy moment to moment.

As a graphic novel, Chiggers works very well. I will admit that there were a couple of characters I had trouble keeping separate for a while, but otherwise the graphics did what they were supposed to do--they showed setting and background and action. The opening pages, in particular, did a wonderful job of showing us a young girl getting ready for and going to camp. And, though I've never been to camp, I've left some kids off at one, and the pages where Abby is lying on her bunk by herself waiting for more people to show up expressed exactly what I think must have been going on for the young Gauthiers. For that matter, it's what goes on when you're the first one to arrive at the dorm in the fall. Except for the lying down part, it's what happens when you're the first one to arrive anywhere.

I do wonder how boy readers will react to Chiggers, if it's just a little too estrogen-ridden for them. That's not a complaint, though. I'm just curious.

Chiggers is a finalist for a Cybil in the elementary and middle grade graphic novel category.
Posted by Gail Gauthier at 7:57 PM
Email ThisBlogThis!Share to TwitterShare to FacebookShare to Pinterest
Labels: Cybils nominees, graphic novels