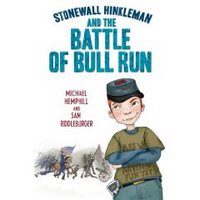 Stonewall Hinkleman and the Battle of Bull Run by Michael Hemphill and Sam Riddleburger (The Qwikpick Adventure Society) is an ambitious book. Its authors are interested in doing a lot of things--creating a twenty-first century main character readers will identify with, providing him with conflict in the form of an enemy, covering moral lessons, and teaching some history just to get started.

Stonewall Hinkleman is the twelve-year-old son of Civil War reenactors who has outgrown any enchantment he had with that activity. While at a reenactment of the Battle of Bull Run (or Manassas) he is transported back in time to that very battle, in progress. Also making his way back in time is another reenactor, one who hopes to change history. Stonewall has to stop him.

The historical portion of this book is its strong point. To be more precise, the battle scenes are its strong point. I found that interesting because, while I've visited a number of Revolutionary and Civil War battle sites, I'm not really interested in the military aspects of battle. I could care less which divisions were on what hill, when they got there, and how long they stayed. I'm interested in people.

Hemphill and Riddleburger provide Civil War era people of interest in Stonewall's ancestor Cyrus and the brothers Big Jim and Elmer. I was also quite taken with all the nameless men who stink because they've been marching for days, wipe blood from their faces, and fall down dead. Young Jacob who really doesn't connect at all with the white boy from the future is intriguing, though we don't see a lot of him.

I think Stonewall Hinkleman and the Battle of Bull Run probably tries to do too much. The plot relating to the contemporary bad guy wanting to save the Old South, for instance, has trouble competing with the more powerful war scenes. The book has set itself up for a possible sequel at the Battle of Antietam. If Stonewall gets to fight another day, I'd love to see him more focused on the people of the past. I can see him going from battle to battle saving one particular character's sorry butt, enabling the guy to survive the war.

Stonewall Hinkleman and the Battle of Bull Run will be published next month by Dial Books.
Posted by Gail Gauthier at 7:14 PM
Email ThisBlogThis!Share to TwitterShare to FacebookShare to Pinterest
Labels: historical fiction, Reader response, science fiction

I agree with you on the battle scenes being the book's strong point. I was perplexed by having Stonewall Jackson in a hero role, though.

I don't know enough about individual generals to have a feeling one way or the other. Though after seeing your own response to the book, I understand your point.