A Lot To Think About 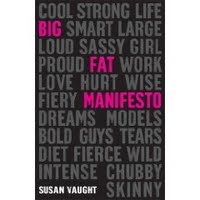 I know that a lot of blog writers like to write about books they love. I have to say I'm at least as interested in books like Big Fat Manifesto by Susan Vaught. I can't say I loved it, but there's a lot to think about here, making the book worthy of attention.

Big Fat Manifesto starts out with shopping and a boyfriend, but I got excited about it because there was something more there. Jamie, our female main character, is fat. (Her term, not mine. I definitely prefer obese, which she rejects as too clinicial.) Three hundred plus pounds fat, and she doesn't care who knows it. The shopping trip that begins the book is an undercover operation to research shopping problems for people of weight, research she will use in her column for her high school paper. The column is called Fat Girl, and in it she speaks for all fat girls and fat boys for that matter. Now, as a general rule, devices like letters, journals, newspaper columns, seem sort of forced in books. However, the logic behind this one works. Jamie wants to submit these columns to an agency that awards scholarships.

Jamie/Fat Girl comes across as very strident, one of those people who see weight as a political or social issue. And that was interesting. But I found it sort of odd that this is a book about the hardships faced by the quite seriously obese, but it also maintains some of the boyfriend and shopping stereotypes you find in teen books about...well, boyfriends and shopping. Jamie is part of a three-girlfriend set, which is the mandatory friendship circle in YA, and she is torn between two lovers, which appears so often in books that it must be some kind of fundamental fantasy among human females. I can see why author Vaught wanted to create a set-up in which the so-called fat girl has a normal teenage life. (Yeah, I know. All normal teenage girls have two guys panting after them.) But the basic point of this book is that this girl doesn't have a normal teenage life. She has trouble buying clothes, traveling, even getting her blood pressure taken. I don't think the she's-normal/she's-not-normal thing quite worked.

What's more, I kept wondering why Jamie never tried to lose weight. Toward the end of the book we finally learn that she had tried in the past, but why her attempts all failed was never addressed. I understood why she's heavy. Overeating is part of her family's culture. But I never understood why another character, Burke, was so heavy that he was considered a candidate for bariatric surgery. How did he get into that shape, and why didn't his affluent, highly educated, loving parents try other options for weight loss before allowing him to subject himself to surgery?

The end of the book was a little problematic for me, too. We're told there's a change in Jamie's character, which is always a good thing in a book...dynamic character and all that... But it's hard to see how that character change is going to make any real difference.

I may have been thinking way too much while I was reading this thing, but I wondered if some people would consider Big Fat Manifesto a "problem" novel, one of those how-do-I-deal-with-this-situation books. Did I feel that way about it? If so, are problem books far more readable if you have a dog in the race, so to speak? Because while I have always been within spitting distance of a normal weight, myself, I come from a family that has been marked by obesity and the many, many, many problems that accompany it for four generations. Probably more, but my memory only goes back to the great-aunts and uncle. I will spare you the details, but I could go on at quite some length on the subject.

Thus, while I suspect some readers might find Jamie's Fat Girl columns to be something of a soapbox, I was glued to them. I had to skim the boyfriend sections of the book because, as a general rule, adolescent romance is lost on me. But bring out the fitness discussion, whether I agree with what's said or not, and I am there.

All in all, I'd have to say that for those readers who like their boyfriend and shopping stories to have something a bit more thought provoking going for them, Big Fat Manifesto has quite a bit to offer.
Posted by Gail Gauthier at 7:22 PM
Email ThisBlogThis!Share to TwitterShare to FacebookShare to Pinterest
Labels: Reader response, YA

I kept wondering why Jamie never tried to lose weight.

Every fat character in every other book does -- it's almost always a symbol, if not the fundamental essence, of the character's growth arc. What this says, of course, is that fat can't be incidental; you can't be a good person or a bad person or a complicated, changing person unrelated to your weight. I'm THRILLED to hear about a book in which this isn't the case!

(I don't know if you're familiar with Health at Every Size, but it might be interesting for you to look at after reading this: http://haescommunity.org/)

As I was reading the book, I did wonder what was going to happen regarding weight loss. Because, as you say, the quick and dirty way to show character growth would be to tie it to weight loss, since our culture believes that to be a positive thing for someone like Jamie, whether it's for beauty or health. In terms of this particular story and character, I would have found that disappointing. I liked the character and wanted her to be healthy, but there was also something about just going for the weight loss that would have seemed as if she were conforming. I felt that the author was really in a bind as to what to do with this situation.