Recently I happened upon some of the late Stephen Huneck's picture books about Sally, a dog that really got around. Though Huneck did attend the Massachusetts College of Art, according to a New York Times article, more than one account says he taught himself to carve and do woodcut prints, making him more of a folk artist than you usually find these days. The Times article called him an outsider artist and said that at the height of his success he was running a multi-million dollar business. 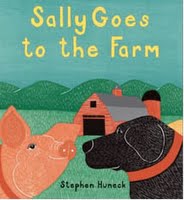 My favorite of the Sally books that I've seen so far is Sally Goes to the Farm. Sally's Snow Adventure would have beat it, but it has a strange shift in the doggy point-of-view from first to third person, something the publisher should have caught.

You don't see much in the way of humans in these books. The dogs take part in human activities--driving tractors, riding on sleds--but they're always dogs. They never wear clothes or hold jobs. These are simple stories that are illustrated with a strong style. I can imagine a family collecting all of them and wearing them out with repeated readings. 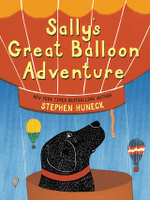 Sally's Great Balloon Adventure will be published next month.
Posted by Gail Gauthier at 7:38 PM
Email ThisBlogThis!Share to TwitterShare to FacebookShare to Pinterest
Labels: Picture books