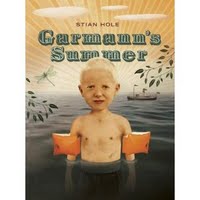 I'm going to admit that I sometimes have trouble grasping what's really going on in books. Sometimes I think too much while I'm reading. Sometimes I don't think enough.

I think I get Garmann's Summer by Stian Hole. I think it's about fear--everybody's scared. I was just left feeling, Well, okay. And?

Garmann is a six-year-old boy who will be starting school soon. The coming event frightens him. Three extremely elderly aunts, who, as illustrated, would probably be his great-great aunts, come to visit. Garmann asks them if they're afraid of anything. He also asks his parents. Each adult is afraid of something. Grown-ups, too, feel fear, and I guess that's supposed to be comforting.

But one of the aunts, it turns out, is afraid of dying, and Mom is afraid Garmann will be hit by a car while crossing the road. And, you know, those fears just aren't on the same level with being afraid of starting school. Okay, maybe I'm not taking Garmann's fears seriously enough. But I think a fear is serious even if it isn't as big a fear as the fear of death. It doesn't have to be on a par with death to be important.

For a much more positive response, check out Fuse #8's review.

I'm guessing the plot for this book began with premise--the idea of a child fearing the unknown of starting school.
Posted by Gail Gauthier at 7:40 PM
Email ThisBlogThis!Share to TwitterShare to FacebookShare to Pinterest
Labels: Picture books, plots, Reader response