I Wish I'd Had A Sensei. Is It Too Late For Me To Get One Now? 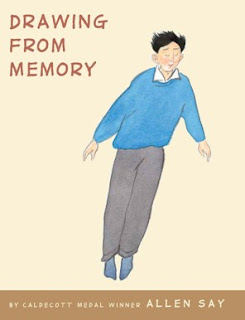 Drawing From Memory by Allen Say is a marvelous memoir, a highly illustrated work based on Say's auto-biographical novel The Ink-Keeper's Apprentice. The publisher describes it as being of interest for grades 5 through 8, but adults can enjoy it because the material is novel but, for us, a quick read.

The period of time Say writes about has a lot going for it. His parents divorced in post-World War II Japan, and he ended up living with a grandmother. That wasn't going well for either one of them, and she and his mother allowed him to live independently from the ages of twelve to fifteen. This is an unusual situation to twenty-first century middle Amercians, but not a tragic one. Say was supported by his mother and lived in a one-room apartment while attending school.

On top of that, though, Say, who wanted to become a cartoonist, managed to become an apprentice to Noro Shinpei, who was, at that time, a well-known cartoonist in Japan. (I'm unable to find anything about him on-line that doesn't relate to Drawing From Memory.) So we also learn a great deal about Say's training as an artist, the work he did with Shinpei, with whom he had a student/teacher relationship, and his study of Greek and Roman sculpture and life drawing.

One of the most interesting aspects I found about the book is that nowhere does Say talk about submitting his own art to any kind of publication at that point in his life. He's always studying or training with his sensei (teacher), Noro Shinpei. It is, I think, a different model then the one I often hear about with young people (and often their parents) believing they should be publishing their writing now, that there are short cuts or that talent trumps actually knowing how to do things.

It is, in fact, different from what I thought I should be doing when I was a teenager and college student. I barely worked/trained at all and would send out any piece of crap I managed to approach finishing. If only I'd had a sensei.
Posted by Gail Gauthier at 4:54 PM
Email ThisBlogThis!Share to TwitterShare to FacebookShare to Pinterest
Labels: memoir, nonfiction, Picture books, Reader response